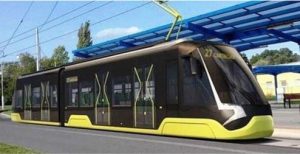 The European Investment Bank (EIB) proposes a EUR 75 million loan for Kharkiv tram project, following the appraisal of the project that has a total eligible value of EUR 100 million.

The project consists of investment in new trams and related infrastructure.

The project is targeting the renewal of Kharkiv City’s tram fleet and the related equipment, with the aim to modernise and increase the effectiveness of the urban electric transport network.

The Acting Mayor of Kharkiv Ihor Terekhov has previously announced that in September it is planned to unveil the first tram car manufactured in the city, under the Kharkiv tram procurement project. The trams are produced and assembled in Kharkiv.

According to the Mayor, the new tram should start operating in 2022.

The introduction of the new trams will solve the city’s surface public transport system, Ihor Terekhov said at the beginning of 2021.

The acquisition of low–floor trams is a programme implemented by the City Council under the Ecopolis HTZ (Hi-Tech Zone) business park, a long–term investment project launched by DCH, a company owned by Aleksandr Yaroslavskyi. The businessman has committed to invest EUR 5.5 million for the production of low-floor trams, from the design phase to the manufacturing process and commissioning of the new vehicles. In 2020, DCH Group said that it is planned to start mass production of new trams within two years. According to DCH, the engineering and consulting support of the project will be provided by the partners from the Czech Republic.
As the city does not afford to acquire European or foreign trams, the authorities have started the discussions with DCH Group to be involved in tram manufacturing project carried out at Ecopolis HTZ. Following negotiations, the city government committed to buy the new trams. In long term, the new vehicles will be available also for other cities in Ukraine which need to renew their fleet. More than 90 per cent of the national tram fleet is over 20 years old and more than 50 per cent needs urgent replacement.

The new plant is expected to manufacture 50 tram cars pers year, and if market demand will increase, there are plans to increase the capacity.