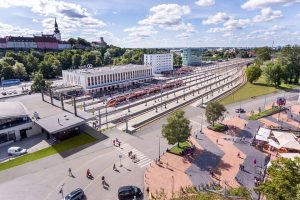 he European Investment Bank and Eesti Raudtee signed a EUR 95 million agreement for the modernisation of Estonian railway network . EUR 205 million is the total value of the projects which include infrastructure and signalling works.

The 25-year tenor loan agreement will be used to modernise the tracks and the control-command and signalling systems on country’s network as well as carry out the digitalisation of the train management systems.

“Our aim is to develop the most convenient, environmental-friendly and safe mode of transport in Estonia. We have set in motion a very ambitious investment plan until 2030 that will take our railway infrastructure to a new quality and safety level and the loan from European Investment Bank is definitely a big part of realizing it,” Erik Laidvee, CEO of Eesti Raudtee, said.

All projects will be implemented on the TEN-T, including on the North Sea – Baltic Corridor.

The projects target the modernisation of several sections on the Tallinn-Tartu line and Tapa-Narva line.

The works on the Tallinn-Tartu line including the construction of a new bridge on the Emajõgi River. Improved safety measures for level crossings and track refurbishment will allow a speed increase up to 135 km/h on the line, improving passenger service and cutting travel times.

On the Tapa-Narva line, two bridges will be renovated, and 54 km of tracks will be renewed, while the level crossings will be made safer.

Apart from the structural upgrades, new signalling devices will be installed on the Estonian railway network, and train management systems will be digitalised, improving service and safety.

Overall, the project will contribute to improvement of quality and reliability of railway services for both passengers and goods, and thus enable modal shift from road to rail with the consequent reductionof energy consumption, noise, and emissions of pollutants and CO2

“The upgrade to the Estonian railway network, as well as realising the Rail Baltica, will deliver travellers a modern, safe and green alternative to the car. Estonian Railways plays an important part here and continues to be a close and much appreciated partner for the European Commission,” said Henrik Hololei, the Director-General for Mobility and Transport.

In 2014, the EIB provided Estonia a financial support for the development of the railway system, including the procurement of new rolling stock.