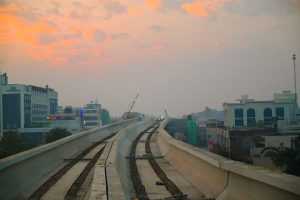 The European Investment Bank (EIB) has signed on December 20, 2021, a EUR 250 million loan for Agra Metro covering the construction of two interconnected lines and the procurement of the related rolling stock.

EUR 908 million is the total cost of the project, of which EUR 450 million was the proposed EIB finance announced in June 2021.

The loan will support the construction of two 30 km lines served by 27 stations in the historic city of Agra, in the state of Uttar Pradesh in Northern India. It is expected that the entire project will be completed in 2024.

Corridor 2 is fully elevated and is separated into two sections one running from Agra Cannt. to Agra College and the second, from Agra College to Kalindi Vihar. Two maintenance depots are to be constructed – one in each Corridor. Both depots are located on either central or state government land. The project is at a very early stage. The construction has commenced in the fourth quarter of 2020 for a small part of one of the elevated sections of Corridor 1 (Taj East Gate to Basai) and for the Depot of Corridor 1.

Under the project, it is estimated that 84 coaches are initially required to operated the new lines, and if the demand will increase, additional metro trains will be acquired.

The project will upgrade the accessibility towards the various ancient monuments in the city, most outstandingly the Taj Mahal and Agra Fort that are also UNESCO World Heritage Sites (WHS).

Agra Metro project is considered as a crucial step towards minimizing the currently high air pollutant levels in these areas, to protect and preserve their identity as WHS.

The project is included in Agra’s Comprehensive Mobility Plan developed in 2011 and updated in 2018 and is consistent with the Master Plan for Agra (2001) as well as Agra City Development Plan (2006). A Detailed Project Report (DPR) was prepared in December 2017, as per Metro Policy of the Ministry of Housing and Urban Affairs (MoHUA), Government of India.

Both the central government (Government of India-GoI) and the Government of Uttar Pradesh (GoUP) have already approved Agra Metro Project. As the project will interfere with Taj Trapezium Zone, a defined area of 10,400 sq. km around the Taj Mahal to protect the monument from pollution, permission to proceed with project’s implementation was requested and has been granted by the Supreme Court of India in July 2020.