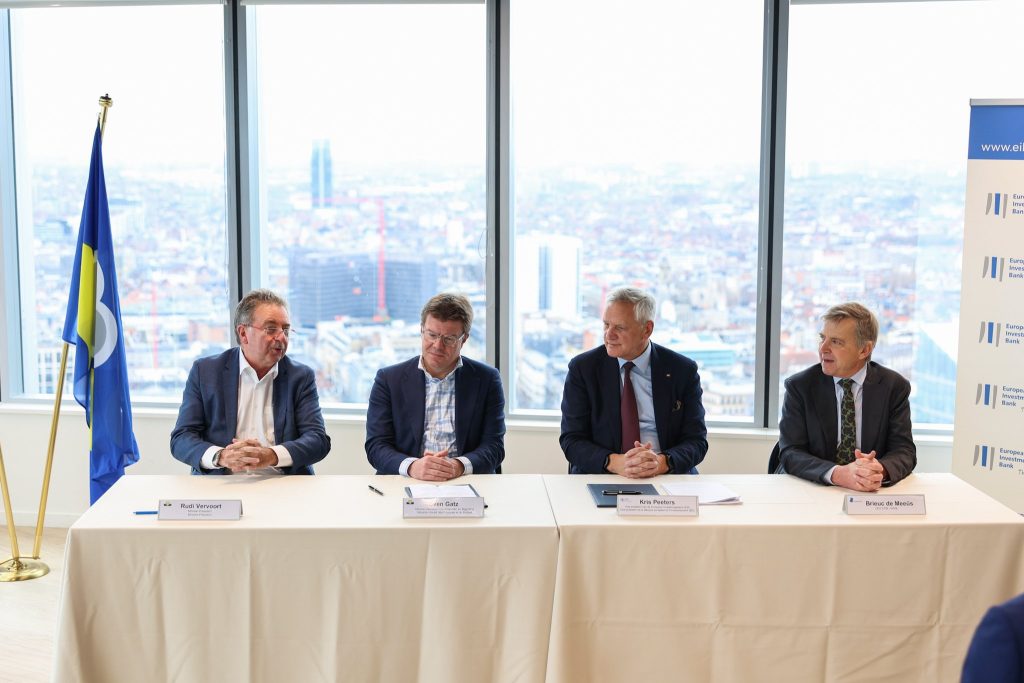 The European Investment Bank (EIB) has signed a contract for the provision of a EUR 475 million financing to improve the quality and sustainability of Brussels public transport system.

The funding will be used by the Brussels-Capital Region to modernise the urban transport fleet and make it more sustainable. The loan will help finance the acquisition of 94 electric buses, 90 trams and 43 metro trains, and the renewal of 63 km of track on existing tram and metro networks.

“With these funds, we will ensure the automation of the metro and the purchase of 43 metro trains, 94 electric buses and 90 trams. Public transport in Brussels will become an even more important mode of transport in the city,” Brussels minister for Finance and Budget Sven Gatz said.

Acquiring the new rolling stock and improving the existing infrastructure are part of a broader carbon footprint reduction strategy by STIB-MIVB, the public transport company of Brussels. By 2030, the company aims to cut carbon emissions by 39% compared to 2010.

The urban rail rolling stock project covers the purchase of 90 TNG trams (tram de nouvelle generation) measuring 32 or 43 metres, and 43 metro trains measuring 94 metres. From 2025, STIB will progressively put into operation the new trams. In 2018, the then Bombardier Transportation (now Alstom) and STIB signed a EUR 167 million contract for 60 Flexity light rail vehicles including an option for 125 additional trams and in 2019, Brussels ordered 30 additional vehicles bringing the entire new tram fleet of 90 LRVs. The new trams are expected to increase the capacity of the tram network by 10,000 seats.

This is the largest-ever EIB loan in Brussels and is the “first financial partnership between the EIB and the Brussels-Capital Region, providing a long-term loan of almost half a billion euros — a record figure for the EIB in Brussels. It highlights the alignment of priorities between the EIB and the region in our climate change mitigation and carbon reduction efforts. With this investment, we want to support people in the capital region by making sustainable public transport the easy choice to get to work, school or university, or to travel for leisure,” EIB Vice-President Kris Peeters said.

In 2016, CAF and STIB signed a EUR 353 million contract for the delivery of 43 M7 metro trains including an option for further 47 vehicles. The 94m-long “Boa” metro trains enable STIB to cope with the constant increase in passenger numbers. Moreover, no less than 43 new M7 trainsets will be put into service on our lines in the coming years.

The investment project also covers installing equipment and modifying the existing infrastructure to implement the new trams and metros, as well as renewing 63 km of existing single-track tram and metro lines, improving the serviceability and availability of public transport.

“Our agreement reinforces an investment policy in favour of Brussels public transport that has been in place for many years and is part of an overall plan to reduce traffic and increase the public transport service offering in order to improve air quality, increase the attractiveness of the region and the ecological transition,” Rudi Vervoort, Minister-President of the Brussels-Capital Region said.

In 2021, STIB opened a 1.7 km northwest extension of tram Line 9 which was inaugurated in 2018. In addition, Line 32 was the last night tram line and was abolished in favour of improved network readability. This development was made possible by increased service frequency on tram lines 55 and 82 in the evening and the introduction of bus line 52. In November 2021, the planning application has been submitted to the construction of the 5.5 km tram line 10 in the Neder-Over-Heembeek in the north of the city.

In 2021, the new M7 metro welcomed its first passengers at the beginning of July, after several months of tests without passengers. In 2021, 9 new metro trains were put into operation on lines 1 and 5 and have freed up vehicles from previous generations that have been placed onto lines 2 and 6 to increase their frequency. At the end of 2021, the capacity on lines 2 and 6 increased by 10% and at the beginning of 2022 a new capacity increase resulted in a total peak gain of 20% compared to mid-2021. The new M7 trains will eventually increase the capacity of the Brussels metro network by 8,000 seats per hour in each direction. At the same time STIB continued the modernisation of the interior design of the old generation metro trains.

In addition, Brussels is constructing the metro Line 3 for which preparations have started in October 2020 and the underground works started in 2021. The 10.3 km metro line with 18 stations will run from Evere, via the city centre, to Forest. The first section is schedules to enter service in 2025. The second section covers a new line from Gare du Nord to Bordet with 7 stations including a 4.5 km tunnel.