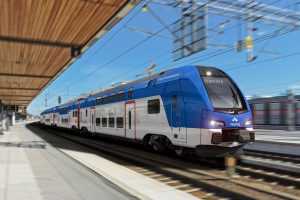 The European Investment Bank and regional transport leasing company AB Transitio have signed a SEK 480 million (EUR 47.2 million) loan agreement for the procurement of 12 four-car double-decker Mälartåg regional trains which will operate on the on regional lines surrounding Stockholm.

“The acquisition of an additional 12 double-decker trains will further increase the capacity for regional services in the Stockholm-Mälaren region and support the mission of increasing travel by train,” CEO of Transitio Magnus von Bahr said.

The financing for the new trains is expected to help promote sustainable transport for commuters and residents, providing an incentive to shift away from road traffic.

“As the EU climate bank, the EIB is investing heavily in alternative modes of transport to give people an incentive to leave their cars at home as much as possible. Sweden is already a leading country when it comes to the production of renewable energy, and focusing on more decarbonised transport is a logical next step,” EIB Vice-President Thomas Östros said.

In March, the EIB has approved the loan for the procurement of the electric multiple units which will replace ageing rolling stock and are expected to improve service reliability, comfort and flexibility, and provide capacity to serve increasing demand.

In June 2020, AB Transitio and Stadler signed a CHF 133.3 million (EUR 123.26 million) contract for the supply of 12 double-decker EMUs which will be delivered by the end of this year. The order is a second exercised option based on a contract signed in 2016 for the delivery of various double-decker trains. The first call covered the supply of 33 trains for Mälab and 8 more trains were added for Uppsala Länstrafik.  In total, AB Transitio ordered 53 Kiss trains.

In August 2021, AB Transitio, Tåg i Bergslagen and Stadler signed the contract for the delivery of seven double-decker Dosto trains which will operate the rail network of Bergslagen region comprising two main lines.