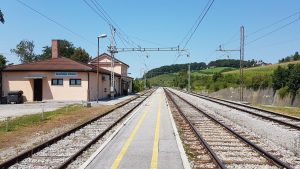 The European Investment Bank is assessing the upgrade and modernisation project of the Maribor-Sentilj rail line in Slovenia. EUR 260 million is the total cost of the project, of which EUR 130 million is the proposed EIB finance.

The project comprises the modernisation and upgrade of the single-track railway section of about 18 km between Maribor and Sentilj at the Austrian border in order to close an existing gap on the Baltic-Adriatic Core Network Corridor. The project also covers the construction of a new line in the length of 2.8 km in a new tunnel and new viaduct (Pesnica viaduct), upgrading of railway stations, reconstruction of the Šentilj tunnel, construction of a noise barrier in the length of 12.3 km, upgrading of signalling and safety devices and establishing passive protection for 75 buildings.

It is estimated that the upgrade will reduce travel times by 1.72 minutes for passenger trains and by 5.97 minutes for freight trains. The introduction of remote traffic control measures will ensure more efficient traffic management. Ultimately, the project is expected to help prevent the shift of freight transport from rail to road.

In August 2019, Slovenia received through the Cohesion Fund, a EUR 101 million grant to modernise the Maribor-Sentilj rail line. The application for approving the funding of the project under the Operational Programme for the Implementation of the EU Cohesion Policy in the Period 2014-2020 was submitted to the European Commission in December 2018.

The corridor also serves Croatia and the Western Balkans region. The project has been supported by JASPERS in the various project related aspects, such as the demand analysis and train operation analysis. The contributions towards major stations layouts resulted in improved design for a more seamless operation of transport services.