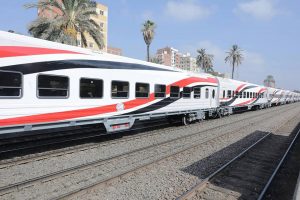 Transmashholding celebrated the delivery of the 100th passenger coach to Egypt, totalling a 103-car fleet delivery within three months. During this period, the Russian manufacturer had an average of one passenger car per day.

The first batch of coaches arrived in Egypt in July 2020 amounting 33 cars. Starting in August 2020, the Egyptian National Railways has been delivered 35 passenger coaches per month.

The delivered wagons operate on a daily basis on the 208-km Cairo – Alexandria railway line, on the 380-km Cairo – Assiut rail connection and on the 473-km Cairo – Sohag line.

The Class 3 cars with forced ventilation are designed for 88 seats. The vehicles meet all the requirements for the safety of passenger transport and provide a modern level of comfort. The service life of the cars in both continental and coastal conditions of Egypt is 40 years.

The coaches are manufactured at Dunakeszi plant in Hungary acquired by TMH and its Hungarian partner Magyar Vagon in a 50-50 joint-venture. 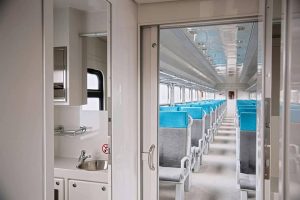 By the end of this year, the Egyptian National Railways will receive 175 additional coaches of the total fleet to be delivered under the EUR 1 billion contract signed in 2018. The contract’s execution period will take 5 years starting from its effect date.

In October 2019, Transmashholding presented the Ministry of Transport the first two prototypes of third-class passenger car.

In April 2020, a financial agreement was signed for the implementation of the contract. The Hungarian Eximbank and the Russian Roseximbank announced their support without unveiling the value of the loans.