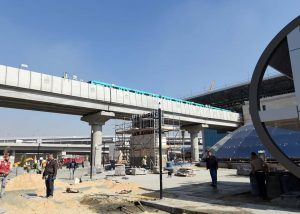 The European Bank for Reconstruction and Development (EBRD) has extended a EUR 250 million loan to finance the Alexandria metro line.

The project which is supported under the EBRD Green Cities programme covers the upgrade of an existing rail line between downtown Alexandria and the north-eastern town of Abou Qir. The line which is currently operated by the Egyptian National Railways (ENR), will be electrified while the rail systems, including signalling, telecommunications and centralised controls, as well as the rolling stock for the new line will be improved.

The line is 22 km long with 20 stations is running from Misr station in the west to Abu Qir 23 km northeast of Alexandria. 13.5 km of the line and 13 stations will be elevated and upgraded to metro standards. Under the project, a train depot and two new stations at Bab Sharq and Sporting will be constructed. A ministerial decision was issued in 2020 transferring the ownership of land required to develop the Project to the National Authority of Tunnels (NAT), excluding the lands for Bab Sharq and Sporting stations as the final designs and the exact locations are not finalised. The area required for the depot is owned by the Al Nahass Company. The transfer of ownership from AL Nahass to NAT is based on a willing buyer – willing seller transaction.

The Alexandria metro line will be managed by a private operator to ensure a high standard of service.

The EBRD funds are part of a EUR 1.76 billion package co-financed by the European Investment Bank, Agence Française de Développement and Asian Infrastructure Investment Bank that has provided a EUR 250 million financing.

Through this project, the authorities intend to bring the first high-capacity metro line in Alexandria that will increase the public transport share and will provide energy-efficient transport service reducing the CO2 emissions and congestion. The upgraded line will also improve public services, significantly increasing capacity and the level of service needed to cater for future demand.

The project is expected to contribute to climate change mitigation result in terms on GHG emission reduction of approximately 260,000 tonnes of CO2 equivalent per year. As Alexandria is located along the Mediterranean coast which is vulnerable to climate induced flood, storm surge, and sea-level rise, the project will have an appropriate drainage system to protect the site against potential flooding from a 1 in 100-year storm recurrence event.