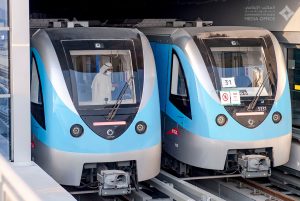 The public transport company RTA says that the new metro line will be opened to the public in September 2020. Operational tests and trials will be conducted within the next months.

The iconic Expo 2020 station boasts a unique design featuring the wings of an aircraft, signifying Dubai’s future drive towards greater innovation. The 18,800 square metres station area has a capacity for 522,000 passengers per day in both directions at a rate of 29,000 passengers per hour in both directions. According to RTA, “the Expo 2020 station is expected to record about 35,000 daily Expo visitors during weekdays, and the number will increase to 47,000 daily visitors during weekends. This number accounts for 29% of the total expected number of daily visitors of Expo,” said Mattar Mohammed Al Tayer, the RTA Director General. 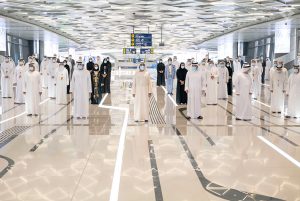 ED 11 billion (USD 3 billion) was the value of the investment needed to implement the project delivered by ExpoLink consortium led by Alstom which also comprises Acciona and Gulermak. The consortium selected Thales to install the signalling, integrated supervision, telecommunications and fare collection system for the new metro line.

Under the contract, Alstom will supply 50 Metropolis trainsets of which 15 trains will provide transport services on the Expo 2020 line and 35 trains will improve the level of Dubai Metro service. Several improvements have been introduced to the interior design of the new trains to avail more convenience to riders and increase the capacity of carriages. In the new trains, the last cabin is designated for women and children and part of the first cabin is allotted as Gold Class and the rest are Silver Class. The seats are arranged in a transversal style in the gold cabin and longitudinal pattern in both the Silver Class and women and children cabin.

The project was implemented to offer metro transport services for a population of 270,000. The Red line metro extension crosses five areas such as The Gardens, Discovery Gardens, Al Furjan, Jumeirah Golf Estates, Dubai Investment Park and the Expo 2020. It is also viewed as a vital future link between several Dubai communities and Al Maktoum International Airport. The new project serves as a symbol of sustainability, progress, and innovation for present and future generations.