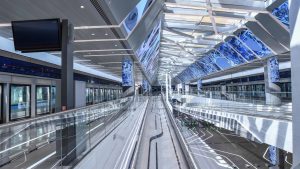 Dubai’s Roads and Transport Authority (RTA) has put into commercial operation the Dubai Route 2020 metro line that was officially inaugurated in July 2020.

The line has a length of 15 km of which 11.8 km is elevated and 3.2 km underground. The line is served by seven stations, out of which three stations are elevated and two are underground stations. The line links the existing Jebel Ali station, which is the interchange station with the Red Line and Expo 2020 station. Jebel Ali station can serve 17000 riders per hour during peak times and 320,000 riders per day. The station has four rail boarding platforms, four bus stands, 17 taxi stands and seven parking slots for people of determination. The interchange station has an 8,800 square metres area with a total capacity of 320,000 passengers per day.

AED 11 billion (USD 3 billion) was the value of the project that has started in 2016 and carried out by the Alstom-led ExpoLink Consortium, composed of Acciona and Gülermak.

As part of the consortium, Alstom was responsible for the integration of the entire metro system including the delivery of 50 Metropolis trainsets manufactured at the site in Katowice (Poland), power supply, communication, signalling, automatic ticket control, track works, platform screen doors and a three-year warranty on the whole system. Under the contract, Alstom was also responsible for the improvement of the existing metro line by upgrading power supply, signalling systems, communication and track works.

The trainsets are 85.5 meters long and composed of five cars per trainset and can carry up to 696 passengers each. They are wide gangways, large doors and windows, and include three specific areas for Silver, Women and Children and Gold Classes.

Eco-friendly, the train is equipped with a full electrical braking system, LED lighting and other innovations to reduce energy consumption, including Alstom’s Harmonic Energy Saver Optimizer (HESOP) which recovers the electrical energy generated by the trains during braking.

The Dubai Route 2020 metro line offer transport connections to four new areas of the city via the metro stations at Jebel Ali, The Gardens, Discovery Gardens and Al Furjan, which are open to the public.