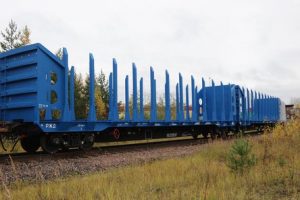 Dessa leasing company signed an agreement for the procurement of an additional batch of new generation of UWC timber flat cars.

The new freight cars will be delivered by the end of May this year.

This latest contract will raise the number of Tikhvin-produced cars in the leasing company’s fleet to 65 units.

The 60-foot UWC timber flat cars have a load capacity of 72.5 tonnes and a volume of 155 m3 which means a 40% increase freight load compared to equivalent models available on the market.

The car’s design reduces unused dimensional volumes and ensures that the car can be loaded without a ‘freight cap’. The flat car is equipped with model 18-9855 bogies with a 25-t axle load, which have improved operational reliability, increasing the maintenance interval up to 1 million km, or eight years. The flat car has a service life of 40 years.

“The railway rolling stock leasing market anticipates tough times ahead, and the drop in demand for universal cars is already being felt. In spite of this, however, specialized fleets are emerging as a promising segment, primarily on bogies with a 25-t axle load. There are several car-building companies currently producing innovative models,” Vyacheslav Pogudin, CEO of Dessa, said.

The cooperation between Dessa and UWC started in 2017 when it has ordered Tikhvin-produced freight cars. “We are delighted with the car’s performance, which is why have opted for UWC once again,” Pogudin explained.