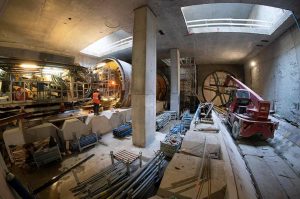 Metro Warszawskie has announced a tender for predesign works for the first phase of Warsaw metro Line 3 for the construction of 8 km of line and six stations including a branch to the Kozia Górka Technical and Parking station.The offers can be submitted by June 28.

The winner will have 18 months to perform the contract which covers a design concept report, the identification of the impact on the neighboring buildings relating the construction of the metro facilities and the approach on this issue, vibration, and dynamic loads on the buildings’ structures. The company will also deliver hydro geological and geological – engineering documentation and will elaborate a functional and operational programme together with the Technical Specification for the execution and acceptance of the construction works.

60% of the evaluation criteria will consider the bidder’s additional experience as a coordinator, an architectural, construction and building and railway engineering designer.

The construction of the first section of the Line 3 is expected to be completed in 2028. It will run from the Stadion Narodowy station to Gocław station in the Praga-Południe district. It will cross the Eastern rail station, Mińska street, Rondo Wiatraczna square, Ostrobramska street, and Jana Nowaka-Jeziorańskiego street. The route of the Line 3 was identified based on the analysis provided by a consortium of Egis Rail and TransEko.

This spring, the Mayor of Warsaw, Rafał Trzaskowski, has approved the construction of the third metro line expected to be used by 315,000 passengers per day that will reach the city centre within 17 minutes when the new line will be put into commercial operation.
The new line will connect the Praga-Południe area with the city centre, and ultimately also with the districts Ochota and Mokotów.