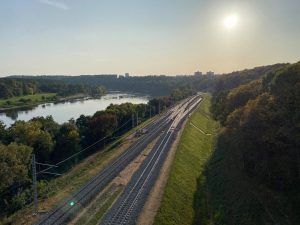 RB Rail has launched the tender for design and design supervision services for the construction of the 64 km Kaunas – Vilnius rail section.

The applications can be submitted by April 14, 2022, and in the second stage of the competition proposal submission and negotiations will start.

The contract is expected to be signed the end of this year and the works will be financed by the Connecting Europe Facility and Lithuanian state funds.

The overall contract is subdivided into smaller sections. Master design services include such activities as site investigations, design proposals, master designs including the acquisition of building permit. The contract also foresees the provision of detailed technical design and design author supervision services to be provided upon request.

The alternative for the Rail Baltica Kaunas – Vilnius section was approved by the Ministry of Transport and Communications in Lithuania in 2021. After numerous discussions with the residents and communities of the two cities and the surrounding regions, as well as considering the standards applicable to the European high-speed rail, it was decided that the so-called northern S5 alternative best meets the needs of all stakeholders.

The trains will be able to travel up to 249 km/h on the Rail Baltica railway line which will ensure the connectivity with the main cities, airports, and Vilnius and Kaunas railway stations can be reached at the shortest possible time. It is planned that the Vilnius region will be served by all planned passenger transport services including the high-speed, regional and night trains. According to the Rail Baltica operational plan, the trains from Kaunas and Vilnius will travel every 30 minutes. Kaunas is a key point for Rail Baltica as is providing freight transport connections from the new intermodal terminal opened in July 2021.

In parallel, specific territories, land plots, and its parts, through which the Rail Baltica railway line will pass, will be determined, and it is planned to make this information public in the second quarter of 2022. The owners and users of the respective land plots will be informed on individual basis.