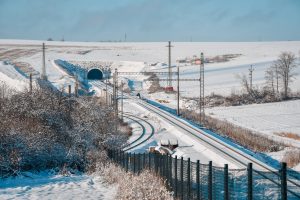 The construction is scheduled to start in 2025 and the line is expected to enter operation in 2028.

A traction power station in Prosenice will be built on the first 20-km section (Prosenice-Hranice na Moravě section), which will ensure the supply of electricity for the operation of trains. The exit to the existing railway network at the Hranice na Moravě station will also be implemented. The suppliers will also prepare the documentation for issuing a decision on locating a construction (DÚR) for this station.

The designers for the second section of Moravian Gate high-speed line, in addition to the DÚR, will also prepare a descent to the current infrastructure in the direction of the Ostrava-Vítkovice railway station. A maintenance facility will be created at the station which will be used to service both sections of the high-speed railway. The length of the second section of the track will be approximately 45 km.

The Moravská brána high-speed line will allow trains to run at 320 km/h.The new line will only serve passenger traffic and will relieve one of the busiest freight corridors in the Cech Republic.The part of long-distance passenger transport that is currently using the main line between Ostrava, Přerov, Břeclav and the capital Prague will be transferred to this high-speed line.

The two high-speed sections are part of the Prague – Brno – Ostrava line (RS 1). The construction is expected to start in 2025 and to be completed in 2029.

The new line will also bring benefits to regional transport in the Olomouc and Moravian-Silesian regions and new connections within integrated systems will be able to use the freed capacity on the corridor.

300 km of high-speed lines are currently in preparation in the Czech Republic. SZ is already designing four sections of the planned network and is searching for designers for three other sections. The high-speed rail plans cover the construction of 700 km system and the construction for the first section will start in the next three years.