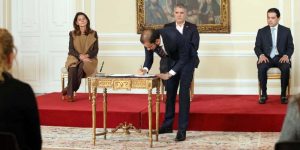 The President of Colombia, Iván Duque Márquez attended the signing ceremony for the design and supervision contract for Bogotá Regiotram del Norte project providing transport link between the capital and Cundinamarca, in the metropolitan area. 2.332 million Colombian Pesos is the value of the contract.

During this first stage, feasibility studies and designs will be carried out for the technical, legal, financial and gender equality and social inclusion structuring of this new railway.

The Bogotá Regiotram del Norte project envisages the development of a new railway connection between Bogotá and Zipaquirá, northeast of Bogotá, and it will also use the existing railway infrastructure. The project expects to receive a total future investment of USD1.5 billion.

Regiotram del Norte represents one of the most important and strategic corridors for the region and undoubtedly will imply a change in the quality of life and mobility for a great number of citizens,” said the President of Colombia.

The 48-km railway connection will be served by 14 stations running from Gran Estación in Bogotá, through the municipalities of Chía and Cajicá to Zipaquirá. According to estimations, the new railway system will carry 250,000 passengers per day.

The Governor of the Department of Cundimarca, Nicolás García, said that the authorities will continue the investments despite the global crisis situation. “These adversities aren’t going to stop us, but will only make us stronger and that’s why both Cundimarca and the country itself are demonstrating that with the Regiotram del Norte project we continue to create jobs and progress,” García said.

The Regiotram del Norte is part of a national plan for the development of public transport system which also includes the Regiotram de Occidente envisaging a 39.6 km railway link from Bogotá to its western metropolitan area.