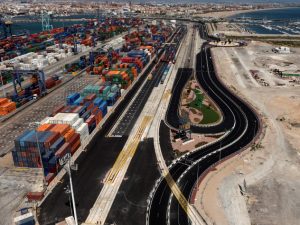 The Port Authority of Valencia awarded the joint venture of Ardanuy Ingeniería and Gesman a contract to elaborate the study for Valencia port rail expansion. EUR 220,000 is the value of the contract which will be implemented over a period of five months.

The study will analyse the track duplication and third rail project between the Poniente and Levante piers.

The works to be carried out include the design of a second railway line that will be constructed between the Espigón del Turia pier and the access branch to the future railway terminal belonging to the Northern extension area.

Furthermore, the elaboration of the study also considers the electrification of both the general and terminus tracks of the Levante Terminal Station as well as the development of their safety, signalling and communications systems.

The projects are part of the Connecting Europe Facility funding for the Valencia port rail expansion and development.

The study on Connect ValenciaPort project has received EUR 11.6 million CEF funding under the 2014 call that had a EUR 55.9 million eligible cost.

The project concerns the upgrade of rail infrastructure including both, studies and construction works, as well as the deployment of ICT tools and technologies and addresses the most urgent problems affecting the Port of Valencia’s rail infrastructure.

The project aims at improving maritime and hinterland interconnectivity as well the accessibility,  constructing a Northern access.

The initiatives are meant to respond to the constant increase in railway traffic recorded by the port and the railway infrastructure will be constructed with the standard gauge to enhance the railway freight traffic along the Mediterranean Corridor.