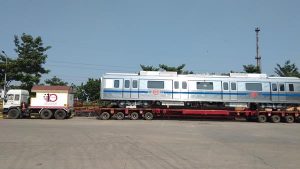 The 800th Movia metro car for Delhi Metro has been sent from Bombardier Transportation’s Savli production facility near Vadodara in Gujarat, Western India and delivered to Delhi Metro Rail Corporation (DMRC).
The metro car will undergo rigorous testing and commissioning processes before starting passenger service. Bombardier will deliver Delhi the remaining 16 metro cars by the end of this year.

“Delhi Metro is pleased to have received the 800th indigenously manufactured metro car from Bombardier for its network. Bombardier’s metro cars, operating across Line 2, 3 and 4, add to DMRC’s extensive metro network that has benefited passengers and society in terms of comfort and environmental sustainability,” said S. S. Joshi, Director for Rolling Stock and Signalling, DMRC.

The new vehicles have a capacity of up to 740 passengers and once configured into eight-car trainsets, can carry more than 2,960 passengers per train on three of Delhi’s busiest metro lines.

The high degree of localization at both the Savli and Maneja sites is in line with Delhi Metro’s indigenous procurement plan that encourages local manufacturing and the Indian government’s ‘Make in India’ programme by delivering rail vehicles, products and solutions that are developed for both Indian and foreign markets.