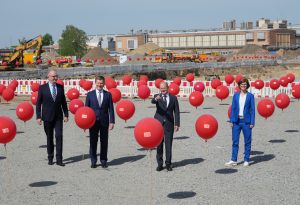 Deutsche Bahn (DB) has launched the construction of Cottbus maintenance workshop which will be opened in 2024 in the first phase and in 2026 it will be fully operational to serve the ICE 4 train fleet.

The new workshop is being built on the site in front of the existing DB location in Cottbus and will be DB’s first heavy maintenance facility for ICE 4 trains. The first hall will be 445 metre-long with two tracks while the second hall will be 570 metre-long with four tracks. The new facility will accommodate 374 meter-long XXL 13-car ICE trains (with 918 seats) or two 200 metre-long 7-car trains. This increased capacity will allow employees to work on all cars at the same time speeding up the maintenance of the trains. The maintenance of the ICE 4 trains with all the necessary work steps should take less than two weeks compared to up to five weeks at the existing ICE facilities.

Elevated rails ensure ergonomic workplaces in the factory halls, where employees can easily work on side flaps and wheel sets. Bogie changers specially developed by DB will be installed in the hall floor so that bogies can be moved to the side for maintenance removing the need of lifting. The components can also be changed much faster than usual.

The project is one of the most important structural strengthening projects in the Lausitz coal region supported by the federal and state governments through law for coal regions affected by the phase-out of coal. EUR 1 billion investment is planned under this law and will also be supported by the governments of Brandenburg, Saxony, Saxony-Anhalt and North Rhine-Westphalia.

As DB is fully committed to digitalisation and automation, the Cottbus maintenance workshop will be the most modern maintenance facility of DB.

“The construction of the new railway depot in Cottbus shows how structural change can succeed. Such innovation projects not only create good jobs – they also bring new economic power and future viability for the entire region,” German Chancellor Olaf Scholz said.

500 jobs and apprenticeships will be created by 2024 and when completed, the number of employees will increase to 1,200.

“The new plant in Cottbus is being built at record speed. We are breaking the symbolic groundbreaking – and in two years we will be waiting for the first ICE 4 trains here. At the same time, we are creating exciting and ultra-modern jobs,” Richard Lutz, CEO of Deutsche Bahn said.

As part of DB’s Strong Rail strategy, the company is continuously expanding its ICE fleet. By 2024, the number of ICE 4 trains will grow from currently almost 100 to 137 vehicles and by the end of the decade, around 450 ICE high-speed trains will be running on the rail network. More trains require more maintenance capacity which will be supported including by Cottbus maintenance workshop making an important contribution to ensure trains will be back on track faster so that more people can travel in a climate-friendly and comfortable way.