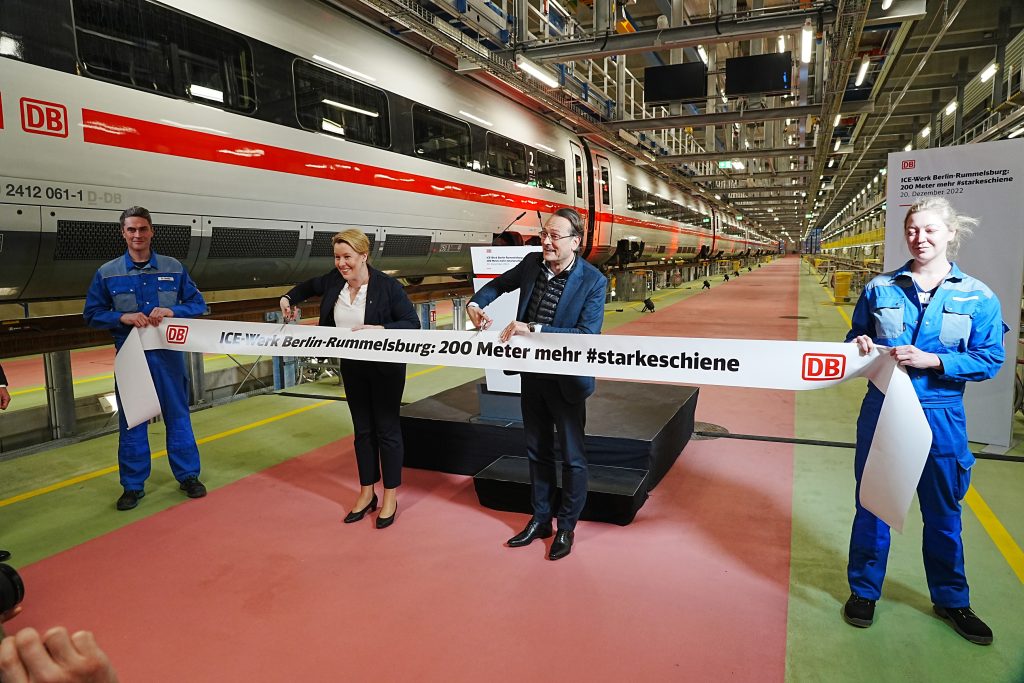 The maintenance facility with five tracks has been expanded by 200 metres allowing trains of up to 400 metres long trains such as the XXL ICE 4 or two short trains to be serviced on a single track. In addition to extending the vehicle hall, DB has created larger material stores and additional treatment facilities for ICE and Intercity trains. This increases the capacity of the maintenance facility by 30% where 75 trains are cleaned, checked and repaired at the site every day.

All series from ICE 1 to ICE 4 can be maintained at the Rummelsburg site, including the future ICE L trains. To this end, DB will continue to expand the Rummelsburg location in the coming years.Over the next few years, more than EUR 200 million euros will be invested into new parking facilities and the renovation of another vehicle halls to increase the capacity.

“The expansion of the Rummelsburg ICE facility shows that Berlin is also a railway metropolis. We are delighted that Deutsche Bahn has made the decision to invest here in Berlin. This brings the Rummelsburg plant up to the technical level of the 21st century. From now on, more and longer trains with more seats can be serviced in Berlin,” the mayor said.

When designing the expansion of the maintenance facility, the planners also took climate protection and biodiversity into account. A photovoltaic system was installed on the new roof, nesting aids for birds and bats were installed and wildflower meadows were laid out. More than 850 employees currently work at the Rummelsburg plant. By 2025, the team will grow by around 120 additional specialists.

DB operates maintenance workshops at nine locations for long-distance trains most of which are being expanded. The company will invest more than EUR 2 billion in the construction and expansion of its plants and parking facilities by 2030 which will ensure a better punctuality and quality of the ICE and Intercity train fleet.

Larger halls, expanded workshops and storage facilities as well as new treatment and sidings ensure that trains can be maintained faster and better in the future. Digitization and automation are also part of the development of its facilities. DB is creating 1,000 additional jobs in the plants nationwide.

DB is renewing and expanding its train fleet for which will invest EUR 10 billion by 2029 including the procurement of ICE trains. At InnoTrans, the company announced that by 2030 plans to spend EUR 19 billion to renew its rolling stock through the procurement of new regional and long distance trains, as well as locomotives and freight wagons.

“We are investing in new trains at a record level. In the next year alone we will receive an average of three new ICE trains every month. With the extended vehicle hall in the ICE plant in Berlin, we are creating urgently needed workshop capacities for our growing long-distance transport fleet. After all, fast and efficient maintenance is essential if our passengers are to travel more reliably and comfortably on climate-friendly rail,” Michael Peterson said.