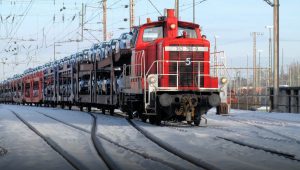 DB Cargo has issued a tender to acquire 250 hybrid battery-diesel shunting locomotives with external charging facilities. The shortlist of bidders will be announced on May 6, 2021.

The new shunting locomotives will replace operator’s diesel locomotive fleet. Under the contract, the manufacturer will be responsible for the design, development, manufacture, commissioning, approval and delivery of the locomotives. In addition, the framework contract includes the supply of spare parts. The framework agreement will be signed with a single manufacturer.

The delivery of the first locomotives is to begin between 24 and 38 months after being ordered. DB Cargo will place a first order for at least 50 vehicles.

The price will have the largest share (60 per cent) of the award criteria, followed by the technology concept, with a 15 per cent share, while the contract conditions and the deadline delivery will each have a rate of 10 per cent.

The selection of the manufacturer includes two main criteria. The applicant must submit information on its last three financial years and must prove that it has achieved a minimum average turnover for rail vehicles of EUR 100 million per year.

The applicant also must present a reference list of the production of approved locomotives in the last 7 years, which contains orders for the production of a total of at least 30 locomotives. The company will also prove that has successfully completed the approval procedure for at least one locomotive in one or more EU Member States or in Switzerland or Norway within the last 10 years or within the scope of an existing delivery obligation to Deutsche Bahn AG or its affiliated companies.

DB Cargo owns locomotive fleet of about 3,000 units including more and more electric and hybrid locomotives, but its shunting activities are performed only by diesel locomotives. The new hybrid battery-diesel shunting locomotives will allow DB Cargo to increase its friendly environmentally locomotive fleet. In September 2020, DB Cargo and Siemens Mobility signed a framework agreement for the supply of 400 Vectron Dual Mode locomotives.

The German operator is moving 500,000 trains per year and 15,000 wagons per day, making a total of 60 million tonnes of transported goods per year.