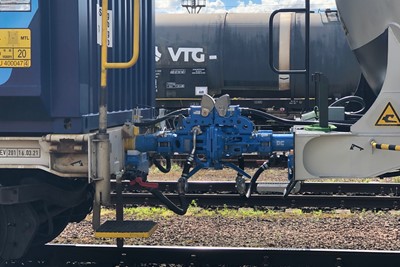 PKP Cargo in collaboration with Deutsche Bahn presented a DAC train in Poznań which took a test trip to the Cementownia Kujawska cement plant of CEMET company, and from here, the train was sent to Koksownia Przyjaźń JSW coking plant in Dąbrowa Górnicza and then to Zabrzeg, in Gmina Czechowice-Dziedzice.

The digital automatic cupling (DAC) is an innovative component to automatically couple and decouple the rolling stock in a freight train both physically and digitally. The new technology allows coupling activities to be digitally performed eliminating manual activities, thus without human intervention.

The digital automatic coupler allows for a significant time reduction when freight train is set up and is also an essential prerequisite for the ETCS Level 3 as well as Automatic Train Operation (ATO), moving blocks for freight trains.

At the Poznań Franowo station, the participants could observe in practice the process of automatically connecting carriages and the passage of a such formed train. Experts also presented the technical solutions used in DAC technology, the principles of operation as well as the advantages of the new system.

“Such a solution will primarily accelerate the process of forming trains, thanks to which it will be possible to send trains faster on the route. The benefits of the new system will translate into lower costs of rail transport and thus it will become more competitive in relation to road transport,” Marek Olkiewicz, member of the management board of PKP Cargo in charge of Operations said.

Among other benefits of using the DAC system, Marek Olkiewicz mentioned the possibility of ral time monitoring of wagons technical condition, which will contribute to reducing damage to wheels and other vehicle components and cases of train faults. In addition, automatic couplers, thanks to a digital module, enable the transmission of a wide range of information to customers about their loads in real time. For PKP Cargo, the implementation of the new digital technology is technically possible, because over 90% of its wagon fleet is adapted to the installation of a automatic coupler.

The DAC train is part of PKP Carog’s plan to digitalise its fleet and develop its activities, increase the speed of trains, the efficiency while providing additional capacity.

The operator says that a wagon equipped with the digital system worth EUR 15,000 and the installation of an automatic coupler in a locomotive is up to EUR 25,000. Assuming that the EU funding will cover more than 80% of these expenses, Polish carriers will have to spend PLN 800 million (EUR 167.47 million) on the replacement of couplers between 2025 and 2030. If the subsidy fell to 50%, the cost for carriers would increase to over PLN 2 billion (EUR 418.67 million).

According to the European Commission plans, the DAC technology will be included in the EU standards TSI WAG and TSI LOC&PAS in 2025 and in 2021 it was announced that the Scharfenberg digital coupler will be the future DAC standard. By 2030 the European rail operators and companies will implement the new digital technology. In January, Germany has started the DAC4EU freight train test which will be completed by the end of 2022.