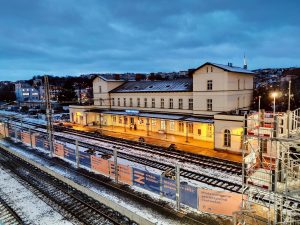 The railway infrastructure manager of the Czech Republic, SZ, has announced that during this year 114 station buildings across the country will be reconstructed. The programme has a value  of CZK 1.75 billion (EUR 69 million).

The plans cover reconstruction, repairs and renovation works for the buildings which will receive modern check-in areas, barrier-free access offering pleasant and comfortable place for local passengers and employees.

54 projects will start this year, while 60, which were launched in 2020 are ongoing and a vast majority are expected to be completed by the end of 2021. “The year 2021 will be an important milestone, for example, for Prague’s main railway station, where two large projects will seamlessly follow each other. In the spring, we will complete the reconstruction of the facade and at the same time start the overall revitalisation of the interior of the building,” Jiří Svoboda, the Director General of SZ said.

Larger or smaller construction projects will be carried out in Central Bohemia, southern Bohemia, Pilsen, Karlovy Vary and Liberec regions.

In southern Bohemia, SZ will focus on 14 buildings with major reconstruction works to start for the stations in Tábor, Písek or Veselí nad Lužnicí, repair works are planned in seven towns while constructions will continue in four other locations.

In the Pilsen Region, expected reconstruction for the station buildings of the cities will begin in spring and should be completed in two and a half years. Significant improvements will be carried out at Plzeň-Jižní předměstí, Planá u Mariánskéch Lázně and Tachov stations while other repairs will be performed at ten other stations.

In Moravia and Silesia the station buildings modernisation programme concerns 31 buildings and Havířov railway station is the most extensive project which requires CZK 157 million (EUR 6 million).

5 stations will be renovated in Olomouc Region, and 4 buildings in Zlín region. In South Moravian Region seven construction projects will start this year with extensive reconstruction works expected to be carried out at three stations.