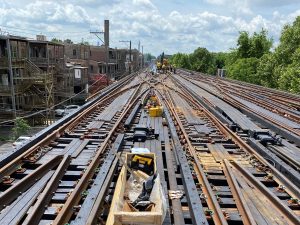 The Chicago Transit Authority (CTA) has proposed a USD 1.64 billion operating budget for 2021 that highlights the need for new federal funding to support public transport across the United States.

Though CTA will enter 2021 with no planned changes to service or fares, the agency depends on continued support at the federal level to achieve that goal.

For the next year, CTA is facing an operating budget deficit of USD 375 million, a shortfall caused solely by the impacts of the COVID-19 pandemic. Since the start of the pandemic in March, the CTA has seen an unprecedented loss of ridership and revenue. Further, state sales tax funding that supports transit is well below anticipated levels.

The American Public Transportation Association (APTA) projects that if Congress or the Administration do not provide additional emergency federal transit funding, six in ten public transit agencies will have to consider service cuts or other cost-cutting measures.

The Congress has already supported public transit with a funding package earlier this year, a funding that helped transit agencies across the country, including the CTA, to maintain service through 2020 and into early 2021. But new federal funding is needed to help transit agencies make up for continuing, unprecedented financial losses and lower-than-normal ridership.

Despite the challenges to the operating budget, which covers day-to-day service, the CTA continues to pursue much-needed capital investment. The proposed budget also includes a five-year Capital Improvement Programme of USD 3.4 billion, which is necessary to continue investing in modernisation and capital improvement projects that will provide safer, more reliable service for customers, as well as an improved transit experience through the continued expansion of public art, removal of slow zones, upgrades to popular transit tools such as Ventra.

More than a half of the capital funding will go toward previously announced major projects, which include USD 60 million for the upgrade of the Cottage Grove Green Line station, USD 50 million for Blue Line O’Hare Branch power improvements, USD 327.8 million for advancement of the Red Line extension project and USD 78 million for the first phase of station improvements under the All Stations Accessibility Plan.

Other capital projects to continue or begin in 2021 include the trials of the 10 new 7000-Series rail cars, quarter-life overhaul work on 5000-Series rail cars, roll-out of newest all-electric buses and the launch of station and track structure construction as part of the first phase of the Red and Purple Modernisation Programme.