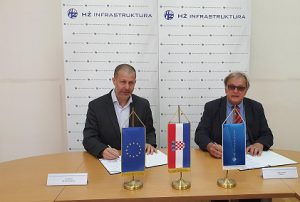 The consortium should complete the documentation within 16 months, which includes the development of conceptual solutions for several route variants, feasibility studies, cost-benefit analysis for the selected variant and environmental impact studies, which will prescribe environmental protection measures.

The Ostarije–Skrljevo rail study will determine the optimal solution of the railway route and other infrastructure subsystems between the two destinations. Two basic variants are possible which include the modernisation of the existing railway in the length of 113.9 km or the construction of a completely new much shorter route of about 67 km which is laid by a new corridor with the construction of long tunnels through the mountain massifs of Mala and Velika Kapela. 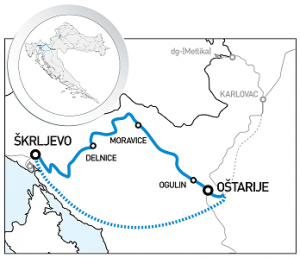 The Oštarije – Škrljevo rail section makes an integral part of the M202 Zagreb – Rijeka railway line for international transport on RH2 Corridor, and at the same time a part of the railway connection to Hungary, on the Rijeka – Zagreb – Budapest route, part of the Mediterranean Corridor. The main goal of project preparation is the development of an efficient and competitive railway transport along the corridor, together with elimination of the bottlenecks on the Croatian part of this corridor.

The contract is funded by the Connecting Europe Facility with 85% of the eligible costs. For designs for the upgrade of Oštarije – Škrljevo rail section, HŽ Infrastruktura and INEA signed the grant agreement in November 2017. EUR 7 million was the eligible costs of the project, of which EUR 5.95 million are provided by the CEF. The remaining EUR 1.05 million, representing 15% of the amount will be financed by HŽ Infrastruktura own funds. The EU funded project includes five activities such as project management, conceptual design and feasibility study, cost-benefit analysis, preliminary design and obtaining of location permit and the Environmental Impact Assessment.