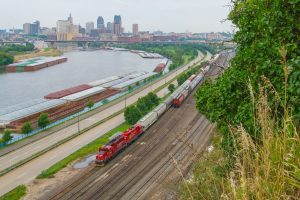 Canadian Pacific Railway has announced that entered into a purchase agreement with OMERS to acquire the full ownership of the Detroit River rail tunnel.

The purchase price for the transaction is approximately USD 312 million. The transaction is currently expected to close at the end of Q4 2020 and remains subject to customary closing conditions, including regulatory approvals.

Canadian Pacific previously owned a 16.5 percent stake of the tunnel in partnership with OMERS. The 2.6-km tunnel Detroit River Rail Tunnel linking Windsor and Detroit will continue to be operated by CP. The acquisition of the tunnel will reduce the operating costs related to movements through the tunnel.

“This is an important corridor for CP and by taking full ownership, we can better operate the asset to the benefit of our customers and the North American supply chain,” Keith Creel, the CEO of Canadian Pacific said.

“Our work with CP represents a strong example of our global investment approach in action, collaborating with a trusted strategic partner as long-term owners and developers of a major international transportation link,” Michael Ryder, Senior Managing Director and Head of Americas for OMERS Infrastructure said.

OMERS has firstly invested in the Detroit River Tunnel Partnership in 2001. The partnership owns this cross-border rail tunnel linking Detroit, Michigan and southwestern Ontario which is a vital transport link for commercial rail freight services between the United States and Canada in the critical transport corridor between the Port of Montreal and Chicago.

The rail tunnel was opened in 1910 and it is currently in a good state, although the transport needs of CP for double-stacked trains require more capacity. The railway operator is paying access charge to CN Rail to use the tunnel in Sarnia when larger cars need to cross the border.

The Michigan Central station east of the Ambassador Bridge in the Corktown neighbourhood connects with the existing Detroit River rail tunnel, but the crossing’s tight confines, age and high volume of freight traffic make it questionable whether Amtrak could even run passenger service through that connection.