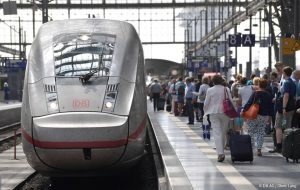 On October 21, the EU ambassadors have endorsed the reform of improved rail passenger rights which will strengthen the rights of all passengers, and in particular those with disabilities or reduced mobility.

The updated provisions will reinforce the rules on re-routing and make it easier to transport bicycles on the trains. They will also promote the use of through-tickets, which improves protection in the event of missed connections. The reform had been provisionally agreed by the Council presidency and the European Parliament on 1 October.

“These new rules will mean clearer and stronger protection for those who want to travel in an environmentally friendly manner, even by bringing their bikes along. People with reduced mobility also want to, and have the same right to, travel by train, and this will be made much easier. A modal shift to rail is vital for the EU’s efforts to meet its climate targets and promote inclusive connectivity,”Christine Lambrecht, the German Federal Minister for Justice and Consumer Protection, said.

The railway companies will be encouraged to increase the offer of through-tickets. These are single tickets which are valid for successive legs in a journey, and they safeguard the rights to re-routing and compensation in the event of delays or missed connections.

Passengers will enjoy improved protection in an increased number of different rail services, as a large number of exemptions allowed by the current regulation will be phased out.

Stronger rights for people with disabilities or with reduced mobility will apply in the future as the current exemption of regional trains from most of the provisions related to passengers with disabilities will be completely phased out by 2023. Other improvements include the right to buy a ticket on board if there is no accessible alternative to buy the ticket beforehand, improved provision of information, training of staff and clearer rules on compensation for lost or damaged mobility equipment.

The green mobility will be also encouraged by allowing passengers to take their bikes on board and the passengers will be informed on the available capacity. The transport of bicycles may be denied if the rolling stock does not permit it. So that such situations arise less often, railway undertakings will be obliged to install spaces for bicycles. The general rule will be at least four spaces for bikes per train.

The new rules will clarify and expand protection in cases where passengers need re-routing to their final destination. The rail operator will have to try to re-route the passenger in all circumstances, including cases requiring alternative modes of transport. If the operator has not managed to communicate the available options to the passenger within 100 minutes, the passenger may take alternative public land transport on his own initiative and the train company must reimburse the necessary cost.

As the regulation lays down a minimum level of protection, railway undertakings are free and encouraged to introduce more stringent rules to protect passengers’ rights.

The regulation on the improved rail passenger rights will enter into force twenty days after it is published in the EU Official Journal. It will be applicable two years later.