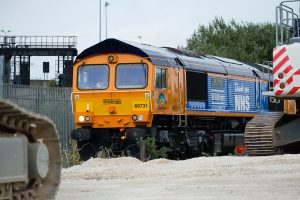 Under the contracts, GBRf will support the training of new train drivers at their new state-of-the-art twin-simulators near Peterborough where the UK’s first and only full-cab freight ERTMS simulator centre is located.

The announcement follows news last month that GB Railfreight will be moving aggregates in a deal struck with RSS, part of the GRS Group and Balfour Beatty Vinci.

One hundred box wagons have been procured specifically for Balfour Beatty Vinci to utilise for rail deliveries needed for the construction of HS2. GB Railfreight will provide traction, drivers, ground staff and timetabling services to ensure delivery on time, and in full. The source point for aggregate will be a Tarmac quarry in the Derbyshire Peak District, one of the aggregate supply locations that is strategically critical for the supply by rail to support HS2.

Under the partnership between GBRf and RSS, which will run up to Christmas, will initially see up to 157 trains deliver 235,000 tonnes of Type 1 aggregate for the first phase of construction work for HS2. Ten trains per week, conveying up to 77 tonnes in 20 box wagons, will transport 1500 tonnes of product per train. This amounts 15,000 tonnes delivered to site per week. The first trainload arrived at Balfour Beatty Vinci’s Washwood Heath construction site last week.

The transport of aggregate by rail will eliminate the need for an average of four HGV road movements for every loaded freight wagon. For the services operating to Washwood Heath, moving 3000 tonnes of aggregate using HGVs would require around 150 trucks, whereas GBRf can transport the same quantity using only two trains.

Averaging this over a four-month period, transporting 235,000 tonnes of aggregate would require 11,750 long distance road movements from the Peak District to Birmingham.