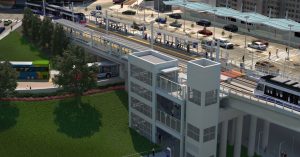 The selected companies are:

In mid – March, PLTP will issue a Request for Proposals to the advancing teams, with selection planned in mid – June.

“We are taking an important step toward delivering the Purple Line to the Maryland public as soon as possible. Collaborating closely with our MDOT and MTA partners, we look forward to rapidly bringing on a new contractor and resuming full-scale construction,” Jane Garvey, Chairman of PLTP said.

The project covers the construction of a 25.7 km that will extend from Bethesda in Montgomery County to New Carrollton in Prince George’s County. It will provide a direct connection to the Metrorail Red, Green and Orange Lines, at Bethesda, Silver Spring, College Park, and New Carrollton stations. The light rail line will also connect to MARC, Amtrak, and local bus services.

21 stations and one short tunnel from Wayne Avenue to Long Branch will be also constructed. Five modular light rail vehicles will operate the new LRT. In 2016, CAF was awarded a USD 200 million contract to deliver 26 five-module LRVs, including the capital spares, special tools and test equipment.

They will be designed with special wheel profiles, noise dampening wheel skirts, and other noise reducing measures to ensure the train will not exceed 75 decibels on straightaways and 78 decibels on sharp turns.

By December 2022, six stations are expected to be opened with the reminder stops scheduled to enter transport services in mid-2023.