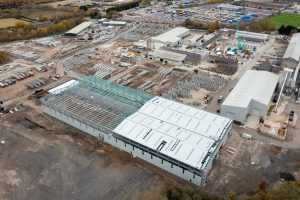 6.4 km of tunnel will be built in thousands of sections at the Ilkeston factory before being shipped to site and assembled at three locations in rural Buckinghamshire and Northamptonshire, to reduce disruption and improve efficiency.

The first tunnel will stretch for 2.5 km past the village of Chipping Warden in Northamptonshire with assembly due to begin on site early next year. Once complete, the structures will be covered with earth and landscaped to blend in with the surrounding countryside.

For the Chipping Warden tunnel more than 5,020 individual tunnel segments will be produced by Stanton as part of the contract awarded by HS2’s main works contractor, EKFB – joint venture made up of Eiffage, Kier, Ferrovial and BAM Nuttall. They will work with specialist engineers Matière who have been appointed to install the tunnel segments on site. The construction of the tunnel is expected to be fully completed in 2024.

The Chipping Warden tunnel will be followed by two similar structures at Wendover in Buckinghamshire and Greatworth in Northamptonshire. All of the green rail tunnels will have specially designed ‘porous portals’ at either end to reduce the noise of trains exiting the tunnel.

The contract enables Stanton Precast to increase their workforce by around 50% which is set to create up to 100 local jobs. New production sheds, casting and storage areas are also being built at the factory to accommodate the new work. In total Stanton will produce more than 13,290 tunnel segments to form the three green tunnels.

Designed as a double arch, the tunnel will have two separate halves for southbound and northbound trains. Five different concrete precast segments will be slotted together to achieve the double arch – one central pier, two side walls and two roof slabs. Each one will be steel reinforced, with the largest weighing up to 43 tonnes.