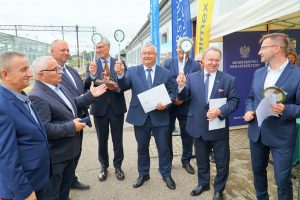 PKP Polskie Linie Kolejowe and Budimex signed the contract for the design and construction and reconstruction works at Ełk station, situated on the future Rail Baltica line.

The project, worth almost PLN 587 million (EUR 128 million) is co-financed from the EU funds under the Connecting Europe Facility.

The works are scheduled to start in the next three months and are planned to be completed by the end of 2023.

“The ongoing construction works on the Polish section of the international Rail Baltica route are an important stimulus, increasing the capacity of the railways for both travelers and freight carriers. The investment plays an essential role on the development of modern transport in Poland, and on the improving the communication of Eastern European countries,” the Minister of Infrastructure Andrzej Adamczyk, said.

At the station, all the three existing platforms will be raised and widened to which will greatly facilitate access to trains particularly for the passengers with reduced mobility. Passenger will benefit elevators at each platform, and new shelters and benches will be installed. Clear marking and sound system will facilitate the orientation at the station and for the visually impaired or partially sighted passengers, there are guidance paths and Braille signs. The non-slip surface and bright lighting will ensure safe movement on the platforms. The communication at the station will be improved by a new passage under the tracks, which will replace the existing facilities. Thanks to the investment, the longer, wider and higher facility will provide safe access to the railway not from one but both sides of the station.

“The result of the signed contract for the reconstruction of the Ełk station consists of better access to railways, increased attractiveness of train travel and improvement of the competitiveness of railways as the most environmentally friendly transport,” Ireneusz Merchel, the CEO of PKP Polskie Linie Kolejowe.

The Ełk Towarowy station will be able to accommodate trains with a length of 740 metres. New devices and systems provided at the local control center in Ełk will enable a higher level of safety in railway traffic. The investment will significantly improve the conditions for servicing freight trains and the transport between Poland and the Baltic countries will be more efficient. The importance of railways as an environmentally friendly and efficient means of transport will increase.

“I am glad to sign an important contract during the European Year of Railways. The works are part of the first stage of the modernisation of the Rail Baltica route, on the Białystok – Ełk section, located on the North Sea-Baltic core network corridor. The modernization of this important railway junction in north-eastern Poland will increase the possibilities and potential of cross-border transport,” Morten Jensen, the Head of Unit, at CINEA said.