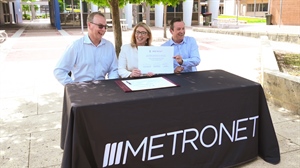 The Western Australian Government and MELconnx Consortium signed a AUD 700 million (USD 496.4 million) contract for the design and construction of the Morley-Ellenbrook line, part of Metronet projects in Perth metropolitan area.

The consortium, led by Laing O’Rourke Australia, will construct the 21-km line including three tunnels and two viaducts as well as five new stations. The line will offer people living and working in Perth’s north-eastern suburbs more transport choice.

This is Metronet’s largest rail project since the Mandurah Line constructed in 2007.

The total project budget for the main contract, including contingency, escalation and ancillary costs, is estimated at AUD 1.1 billion (USD 780 million).

The Morley-Ellenbrook line starts at Bayswater station on the Midland Line, crossing through the centre of Tonkin Highway, entering and exiting under the lanes, then through land north of Marshall Road, along the western side of Drumpellier Drive and ends in Ellenbrook town centre, south of The Parkway.

The line will be served by five new stations while the existing Bayswater station will be relocated and upgraded. A future stop is planned at Bennett Springs East as the population and development in the area increases. Each station will offer modern passenger amenities, such as cycling facilities and passenger toilets.

Early works are underway at the Bayswater station upgrade, where the Morley-Ellenbrook line will spur off, and for the Main Roads WA Tonkin Gap project, which includes significant civil and structural works between Bayswater and Malaga to allow rail access in and out of the Tonkin Highway.

Once operational, the passengers will have transport options of travelling to Perth, the airport, and other stations on the Midland Line, including the connections to other stations along the Perth network from Yanchep to Lakelands. In addition, the line will have four bus connections

Passengers from Ellenbrook Station will have a seamless 30-minute journey to the CBD, with no need to transfer trains. This is almost half the current travel time for local residents using public transport.

The line is expected to enter commercial passenger services in 2024.

By 2031, it is estimated the rail line will take more than 10,000 car trips off roads in the north-eastern suburbs each day. Due to the lack of rail, the Morley-Ellenbrook corridor has the highest usage of cars compared to other Perth corridors.