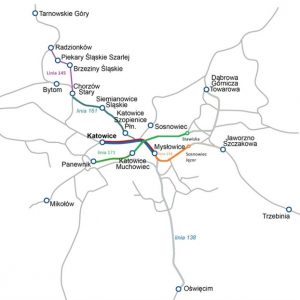 PKP Polish Railway Lines and Schuessler-Plan Inżynierzy Sp. z o.o signed a contract for the feasibility study to expand the Katowice rail agglomeration and the construction of additional tracks on the Katowice – Mysłowice railway line. PLN 8 million (EUR 1.8 million) is the value of the contract which is financed from the state budget. The tender for the study was announced in April 2020.

“PKP Polskie Linie Kolejowe implements the investments and prepares further projects. In the Silesian Voivodeship, we see the need to develop and improve passenger and freight rail transport. The signed contract for the feasibility study will allow to effectively plan further projects for the benefit of the residents, the economy and the environment, Ireneusz Merchel, the CEO of PKP PLK said.

It is planned to separate agglomeration traffic from long-distance traffic, and thus it will be possible to launch a greater number of passenger connections. The rail freight transport will also be improved and more efficient towards Krakow. The adaption of the five stations for longer freight trains of up to 750 metres will be investigated. The proposals developed as part of the study will be consulted with carriers operating in the Katowice rail agglomeration. This will allow for a good forecast of the conditions needed for the growing traffic volume and ensuring the availability of railways in Katowice and in the surrounding cities.

The study works will determine the scope of the future project, its effects and implementation costs.

The study will analyse the possibility of rail expansion of five rail lines aiming at passenger and freight transport improvement. An important part of the analysis is to determine the increase of the availability of rail transport in Katowice rail agglomeration by building Mysłowice new stop.

The contract is a significant move towards increasing the role of railways as an efficient and sustainable transport mode. The feasibility study is expected to be completed in 2023 and the development of design documentation and construction works are planned to be carried out in the next financial perspective.