A new rail contract signed in the Czech Republic includes the reconstruction of Velim – Poříčany rail section and the stations along the line. 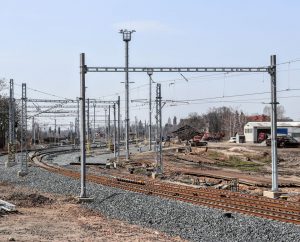 The Czech railway infrastructure manager, Správa železnic, awarded a consortium of Swietelsky Rail CZ and Subterra a CZK 3.83 billion (EUR 140.8 million) contract for the reconstruction of Velim – Poříčany railway section. It is located on the Orient-East Med and Rhine-Danube Core Network Corridors and is country’s busiest railway line.

The construction works will start in June and they are expected to be completed at the end of 2022.

Under the project, a complete reconstruction of Velim – Poříčany section’s substructure and superstructure is planned. As part of the construction, new sections will be built in Cerhenice and in Tatce, which will increase the variability of traffic management on the railway section.

The project also envisages the modernisation of the stations along the section, excepting Pečky station’s tracks and more than twenty switches which will be recosntructed in a separate project, currently under preparation.

Platforms in Cerhenice and Tatce stops will consist of console panels with a standard height of 550 mm above the top of the rail as well as a barrier-free access. The Velim railway station and both stops will have a new information system and modern equipment.

Five railway bridges will be reconstructed on the Velim– Poříčany section and at the same time the unused railway crossing will be cancelled in Dobřichov. Anti-noise measures will be extended while the overhead traction lines, including all components, will be completely replaced. The technical state of heating of switches, low-voltage and lighting installations will also be improved.

This project also includes the renewal and functionality extension of the station interlocking equipment in Velim and Pečky. A completely new station interlocking system will be built in Poříčany. A new centralized automatic electronic block will be installed resulting in the necessary software modification.

This is country’s first project funded through the CEF Transport Blending call (2017) which covers 20% of the eligible costs valuated at EUR 191.4 million, of which EUR 38.3 million is the European maximum EU contribution. For the project, the European Investment Bank provided a co-financing with up to 50% of the total investment costs. The national funding will be provided by the State Fund for Transport Infrastructure.