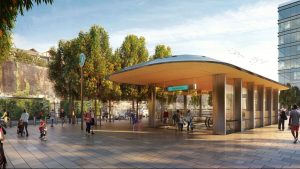 The contract includes the underground station platforms and full fit–out, station entrance next to Nawi Cove, a variety of pedestrian and cycling facilities, surrounding roads, upgrading Hickson Road, and the public domain works including footpaths, tree planting, lighting and street furniture at Nawi Cove and along Hickson Road.

The Barangaroo Station site has already been excavated and the Besix Watpac is expected to commence the construction in October 2021 with completion scheduled in 2023.

“As a multi-disciplinary contractor specialising in complex projects, Barangaroo Station represents an ideal opportunity for us to showcase our capability and deliver a special result for Sydney Metro and the people of New South Wales,” Besix Watpac CEO, Jean-Pol Bouharmont said.

The new Sydney Metro station at Barangaroo is taking shape 30 metres underground. The station box has been excavated and the crossover cavern where trains can switch tracks has been carved out.

“The excavation stage is complete after an incredible two years of work to remove about 650,000 tonnes of dirt and rock, enough to fill almost 100 Olympic swimming pools. The result is fantastic, and now we’re ready to build the station itself,” Minister for Transport and Roads Andrew Constance said.

Barangaroo Station is one of six new metro stations being built on the Sydney Metro City & Southwest project which involves the extension metro from the north west, under Sydney Harbour through new underground city stations and beyond to the south west. Using five TMBs, tunnelling has been finished in early 2020 on new 15.5-kilometre twin railway tunnels between the end of Sydney Metro Northwest at Chatswood and Sydenham. The new metro line is expected to enter transport operation in 2024.