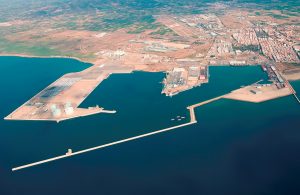 The EUR 14.5 million contract was awarded to Obras y Servicios (Copasa) with an execution period of 16 months. The single electrified line will have mixed gauge and will offer the connection to the auxiliary facilities of the port. The project envisages the construction of 5.6 km of rail tracks built into two different branches, which converge into a third one, forming the Sagunto Port rail access to Valencia-Tarragona railway line on the south and north sides towards the port.

The first branch will have 4.6 km with two straight alignments of 1.9 and 1.6 km running parallel to Camí La Mar industrial area and the Valencia’s largest business parks, the Parc Sagunt road to the port. The second 509-metre-long section will run from the current Valencia-Tarragona line to the first branch, providing the railway link for the trains which are operating to and from Valencia’s south area. The third 515-meter-long branch will be constructed from Valencia-Tarragona line to the first branch. This section will be used by the trains running to and from the north, the Castellón side.

The construction works envisage a connection of the 2nd and 6th tracks of the Sagunto station, situated on the north side of the port. The project also includes a railway platform, two viaducts and two underpasses on the first branch, track and sleeper installation and for mixt gauges, the needed devices, electrification system adapted to the mixed track gauge sections for 3,000 V direct current and 25 kV alternating current.

EUR 40 million is the total value of Sagunto Port rail access, of which WUE 11.4 million is covered by the European Regional Development Fund under the P.O. Plurirregional de España 2014-2020, objective 7 on sustainable transport.

The project is expected to be completed by the end of 2023 allowing a 10% increased traffic. It will also enhance the maritime connectivity of the Valencian region and the port of Sagunto hinterland.