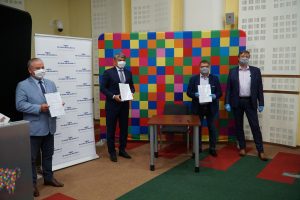 PKP PLK has signed a contract for the construction of a Rail Baltica viaduct, marking the first investment of the railway connection between Czyżew and Białystok. The viaduct will be constructed in in Uhowo, Białystok County under a PLN 10.4 million (EUR 2.3 million) contract awarded to Budrex.

The project is expected to be completed by November, replacing the existing rail crossing. The viaduct will be 130 m long and over 25 m wide. As part of the Warsaw-Białystok project, PKP PLK will also construct a pedestrian underpass that will conveniently offer connection to the train stop.

“The viaduct is a missing component of the Uhowo bypass. The contract is the next stage of the investment project which has an important impact on region’s inhabitants,” said Artur Kosicki, the Marshal of the Podlaskie Voivodeship.

The costs of the Rail Baltica viaduct, part of Poland National Railway Programme, is covered by the EU under the CEF, under the works on the E75 line on the Czyżew – Białystok section project. Podlaskie Voivodeship is responsible for the financing of supervision service.

The new viaduct is the first of the 33 facilities to be constructed as part of Białystok – Czyżew project under the Rail Baltica in Poland. Eleven collision-free intersections increasing traffic safety will also be built on the section from Warsaw to Małkinia.

“We are implementing subsequent stages of work between Warsaw and Białystok under the Rail Baltica route and we are using co-financing from the Connecting Europe Facility instrument. The viaduct in Uhowo will be another collision-free intersection increasing the safety of railway transport services and well as the communication with the road transport system,” Ireneusz Merchel, the CEO of PKP PLK said.

In 2019 a tender was launched for the 71-km Czyżew – Białystok line modernisation with a value of EUR 372 million which is also co-funded by the CEF. 12 stops and 6 stations will be modernised, reconstructed and adapted to the passengers with reduced mobility.

The project is expected to be completed in 2022, when trains will be able to run at speeds of 200 km/h.