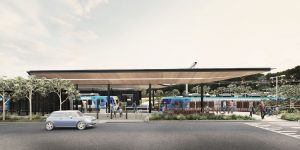 The construction is expected to start now that contracts have been awarded for the AUD 530 million (USD 410.9 million) project.

The project also includes the construction of a new pedestrian connection behind Diamond Valley College and upgrade works for the second platform at Diamond Creek station.

Under the Hurstbridge line duplication project, the designs for the two new modern stations at Greensborough and Montmorency have been unveiled. They reflect the community’s key priorities, with extensive vegetation and landscaping, better connections, and more parking spaces. Landscaping will see over 1900 trees and 37,500 shrubs, plants and grasses planted around the stations and along the rail track. Sustainability is a key consideration, with solar panels, rainwater tanks and LED lighting included in the design.

Until mid – 2021, the works include tree and vegetation removal, installation of fencing, including protection of any heritage and environmental zones, placement of barriers on roads, excavation and installation of underground power and signalling equipment. In addition, piling for overhead rail signals and power, investigation works on underground services and geotechnical investigations are to be carried out.

The project will improve the reliability and enable trains to run, on average, every 7 minutes from Greensborough and every 10 minutes from Montmorency and Eltham during the morning peak. Once completed, the project will offer better connections to public transport in Melbourne’s North East.

The first stage of the Hurstbridge line upgrade was completed in 2018. It delivered a new station in Rosanna and removed two dangerous and congested level crossings at Grange Road in Alphington and Lower Plenty Road in Rosanna.