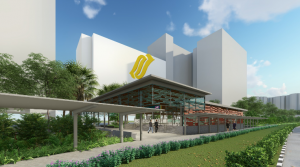 The contract covers the design and construction of Pasir Ris interchange station and tunnels, as well as addition and alteration work to the existing Pasir Ris station along the East-West Line (EWL).

The construction works for the Pasir Ris station are expected to start in the fourth quarter of 2021, with passenger service planned to commence in 2030.

On March 2021, LTA signed a USD 266.22 million contract for the construction of a 3.2 km tunnel from the Aviation Park station to Loyang station.

The first phase of the new MRT line is expected to be completed by 2029 shortening the travel times for commuters between the central, north-eastern and eastern parts of Singapore.

The Cross Island Line (CRL) is Singapore’s eighth MRT line which will provide transport links between Aviation Park and Bright Hill. It will be 29-km-long comprising 12 stations of almost half of which will be interchanges stations with other rail lines. The corridor will serve residential and industrial areas in Loyang, Tampines, Pasir Ris, Defu, Hougang, Serangoon North and Ang Mo Kio. More than 100,000 households will benefit the new connection that will provide easier and more convenient transport services across the rail network.