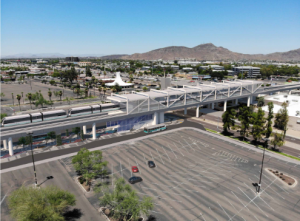 Valley Metro Rail awarded Kiewit-McCarthy joint venture the contract for the construction of the second phase of Northwest LRT extension in Phoenix. The construction and utility relocation are expected to start in August.

Under the contract, the joint venture will construct a 2.6 km LRT section and three stations and a park-and-ride facility on the existing 45 km-long light railway line Phoenix, Tempe and Mesa.

The Northwest LRT extension will start west on Dunlap Avenue from 19th Avenue, north on 25th Avenue and across I-17 on Mountain View Road with a terminus on the west side of the freeway near Metrocenter Mall. Metrocenter Station will be the first elevated station in Valley Metro’s light rail system. The existing Transit Center will relocate to below the elevated station. Adjacent to the transit center will be a four-story park-and-ride garage that will be accessible to the station.

In March, the Federal Transit Administration has approved the second phase of the LRT extension together with the procurement of three light-rail vehicles.

The new section will offer transport link from the Metrocenter to the regional centres such Phoenix Sky Harbor International Airport, Arizona State University and the Phoenix downtown.

The light rail extension is expected to enter services in 2024. Initially, the Phoenix City Council estimated that the new line will be opened in 2026, but following speeding up the project implementation, the scheduled opening was set for 2024.

USD 318.66 million is the estimated value of the project, of which USD 156 million is the federal funding, while the City of Phoenix will provide USD 132.5 million and Maricopa County will allot USD 30 million.

The project is funded through Transportation 2050, a 35-year, multi-modal transport plan approved by Phoenix, as well as regional transport funds and a grant from the Federal Transit Administration.