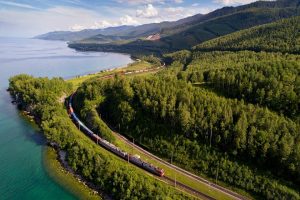 In May, Russian Railways recorded a 1.7% increase of rail freight transport on the BAM and Trans-Siberian Railway, dispatching 15.1 million tonnes of cargo to the stations in Transbaikalia and the Far East.

A large part, of 11.3 million, was made up of export shipments primarily coal, which recorded a 1.3% increase, reaching 8.7 million tonnes. There was also a 28% increase in ferrous metals (0.6 million tonnes), a 1.7-fold increase in oil and oil products, an increase of 1.4 times for iron ore and an increase of 1.5 times of fertilizers. These cargoes were transport on the BAM and Trans-Siberian Railway, including to the ports and border crossings in the Far East.

In the same month, the company has also registered a 18.5% increase in container transport, reaching 81,100 TEU and a 25% increase (1.1 million tonnes) of cargo, transported to Transbaikalia and the Far East.

To increase its capacity, Russian Railways is using connected container trains, which recorded a 7% increase, while the number of heavy trains increased by 11%. This includes a threefold increase in the number of trains weighing 7100 tonnes using new 3ES5K class locomotives with axial traction control. In total, 139 of these locomotives are already running in the East and another 90 will be added in 2020.

The growth in traffic volumes in the East is occurring even as there are significant obstacles associated with large-scale infrastructure repairs, reconstruction, and construction.

Russian Railways has carried out infrastructure development projects to eliminate bottlenecks on the railways of Transbaikalia and the Far East in order to provide additional volumes of cargo transport for Russian companies.

According to the project’s first stage schedule, for 2020 it is planned to ensure exports of natural resources in the East in amounts of 113.2 to 124.9 million tonnes, representing an increase of 55-66.8 million tonnes compared to 2012.