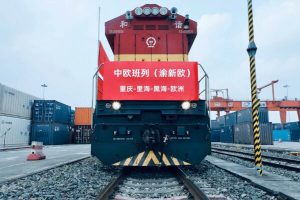 Nurminen Logistics dispatched the first full-length container train from Chongqing, China, to Central Europe on May 10, using the southern Trans-Caspian route.
The train has containers with a wide range of products from European customers. The containers include components from various industries and summer products from jacuzzi to outdoor sports equipment.

The Trans-Caspian route, which combines rail and sea transport, responds perfectly to the needs of modern transport chains, where time and environmental friendliness play a significant role. Transport time from China to Central Europe is approximately three times faster than sea freight.

“Opening the route required strong confidence from China Railways in our operations and, above all, our customers’ trust in us. In addition, Nurminen’s international railway team also showed excellent expertise and implementation in a difficult and fast-paced situation,” Olli Pohjanvirta, the CEO of Nurminen Logistics said.
Nurminen Logistics says that there is strong demand for the new route and the first train is full, as well as the second train departure scheduled for May 25.

There are plans to start weekly departures from June strengthening Nurminen’s current door-to-door rail service between Asia and Nordic countries and container train services between Norway, Sweden, and Finland.
The route will also increase the company’s customer base in Central Europe and enable the further development of the company’s multimodal transport solutions.

The Trans-Caspian route starts from China and runs via Kazakhstan, Azerbaijan, Georgia, and Romania to Central Europe.
The new route has been put in place from scratch in two months in cooperation with the Kazakh Railways. In March 2022, Nurminen Logistics and Kazakh State Railways (KTZE) signed a cooperation agreement to start a test train during April-June and to launch commercial traffic between July and September. KTZE has agreed to cooperate with the railway companies of Azerbaijan, and Georgia, providing all conditions for organising the transport corridor. The two companies also agreed to intensify cooperation on the China – Finland route, focusing on the use of rail wagons registered in Kazakhstan and owned by Kazakhstan companies.