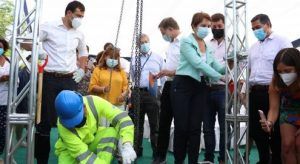 The Transport and Telecommunications Minister of Chile, Gloria Hutt, and the President of Chilean Railways Company, Pedro Pablo Errázuriz, launched the construction works for the future Tres Poniente station, as part of the Train to Melipilla project, which will be the second sommuter line of Santiago.

The ceremony also marked the renovation works for the Vespucio and Ciudad Satélite stations. Under the project, various other civil works that began in April 2021.

These will be the project’s first three stations, located in the municipality of Maipú (situated in Santiago metropolitan area), and will form part of a total 11 stations of the Santiago – Melipilla commuter rail  service that is expected to start operating in 2026.

“It is a dream to recover the railways. This project is therefore one of the most important things that we’ve been working on,” the minister said at the ceremony.

By 2027, the authorities intend to triple the number of passengers reaching 150 million, of which 50 million will use the Alameda-Melipilla train service.

“The Train to Melipilla project will be the most massive service that we’ll have, with more than 50 million passengers per year. They will see their quality of life improved by reduced travel times and an improved public transport service, which we’ll be able to offer them from 2026,” Pedro Pablo Errázuriz said.

The investment is part of Chile on Rails programme which covers construction works from the Santiago Estación Central and Melipilla. The 61 km long connection will benefit three tracks to Malloco with two tracks for passenger trains and one for freight trains, and two tracks to Melipilla, with one track designed for passenger trains and one for freight trains. The rail system will have connections to Santiago metro lines 1 and 6. In addition, five of the eight municipalities that will benefit from the project are currently not part of the transportation system, so this project will be their gateway to the RED system.

Under the new Tren a Melipilla project, 22 new electric trains will be put into commercial operation. The project also covers the construction of 15 under/overpass crossings for trains, 49 under/overpass crossings for pedestrians, 12 automated level crossings, a workshop and depot, total confinement of the railway and the installation of new signalling, communications and electrical power systems.

USD 1.5 billion is the total value of the project which is expected to be completed within five years. The initiative will allow up to two hours to be saved on traveling times per day.