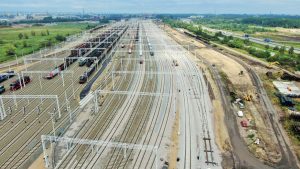 PKP Polskie Linie Kolejowe has completed the main works at the Gdańsk Zaspa Towarowa station under the programme to increase the rail access at the TriCity ports.

The completed works at the station allow trains to run on the reconstructed and electrified tracks, including on the lines 227 and 249 along the Gdańsk Główny – Gdańsk Zaspa Towarowa route.

At the Gdańsk Stadion Expo stop, works related to the construction of the slab-free surface within the exhibition square have been completed, resulting an exhibition area of about 6 thousand square metres. The tracks at the Gdańsk Wiślany station and on the Gdańsk Zaspa Towarowa – Gdańsk Wiślany line were replaced.In total, the contractor has already built all 70 turnouts and over 22 km of track.

At the Gdańsk Port Północny freight station, the trains are using 32 new tracks with a total length of 28 km and 95 turnouts. The new traction network ensures efficient and environmentally friendly transport, which is in line with the EU climate protection policy. At the station, the land is being prepared for the development of another group of tracks. On the line No. 965, between Gdańsk Kanał Kaszubski and Gdańsk Port Północny station, at an important intersection, rail crossings, the tracks and turnouts were reconstructed.

The project also included the construction of a road viaduct and road access which were completed. the viaduct replaces the level crossing between Gdańsk Kanał Kaszubsk and Gdańsk Port Północny station. The collision-free intersection will improve the safety of road and rail traffic and improve communication in the area, ensuring efficient access of trains and cars to the Gdańsk Port.

As part of the project to improve railway access to the port in Gdynia, new tracks are being laid, turnouts are installed, and the traction network components are installed. About 30 km of tracks and 43 turnouts have been built. The trains already run on 8 km of new tracks with 25 switches and temporary track-to-track connections enable the smooth running of the works while keeping the track permanently accessible in the port area.

In the newly built building area of the Local Control Centre, two control rooms, ventilation and air-conditioning systems are installed. In addition, two new railway viaducts will improve the access to the port. Four tracks will be laid on one of the viaducts, while the second one will have one track.

The TriCity ports comprises Gdańsk, Gdynia and Sopot ports. The Polish rail infrastructure manager is carrying out rail access improvement programme at Gdańsk and Gdynia ports to provide increased capacity and allow 750-metre trains with an axle load of 221 kN/axis. This will improve the competitiveness of the rail transport compared to the road transport offer and thanks to the new traffic control devices, freight transport will be more efficient and safer.

The investment for the modernisation, construction and electrification of the rail connections at the Gdańsk and Gdynia ports amount PLN 2.6 billion (EUR 573.48 million) and received a 40% European co-financing through the Connecting Europe Facility. The completion of all works in Gdańsk is planned by the end of 2021, and in Gdynia by the end of August 2022.