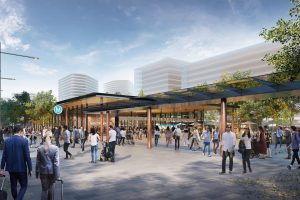 The construction of Western Sydney Airport metro line will start later this year which will provide transport links from St Marys railway station to the new Western Nancy-Bird Walton airport.

At St Marys station, the line will have transport connections with the existing suburban railway station and connecting passengers with the rest of Sydney’s rail system.

AUD 11 billion (USD 7.3 billion) is the value of the project which will receive a AUD 3.5 billion (USD 2.34 billion) federal funding under an agreement signed between the New South Wales and Australia’s governments.

“The new metro and the new airport will deliver billions of dollars and thousands of jobs to Western Sydney, while establishing the infrastructure needed now and into the future. Construction is already well underway on the airport, and later this year works will start on this new Metro service which will link the suburbs of Western Sydney to the rest of Sydney,” said Minister Scott Morrison, the Prime Minister of Australia.
The line is expected to be opened in 2026.

Western Sydney Airport metro line will become the transport spine for the region, connecting travellers from the new airport to the rest of Sydney’s public transport system.

The line is a key part of delivering an integrated transport system for the Western Parkland City which cover parts of Greater Western Sydney including the established centres of Greater Penrith, Liverpool and Campbelltown-Macarthur.

The new Western Sydney International (Nancy-Bird Walton) Airport is currently under construction and it is also expected to become operational in 2026.

The AUD 5.3 billion (USD 3.5 billion) airport project being funded on an equal joint basis by the Commonwealth and New South Wales governments under the Western Sydney City Deal which support the creation of the Western Parkland City.