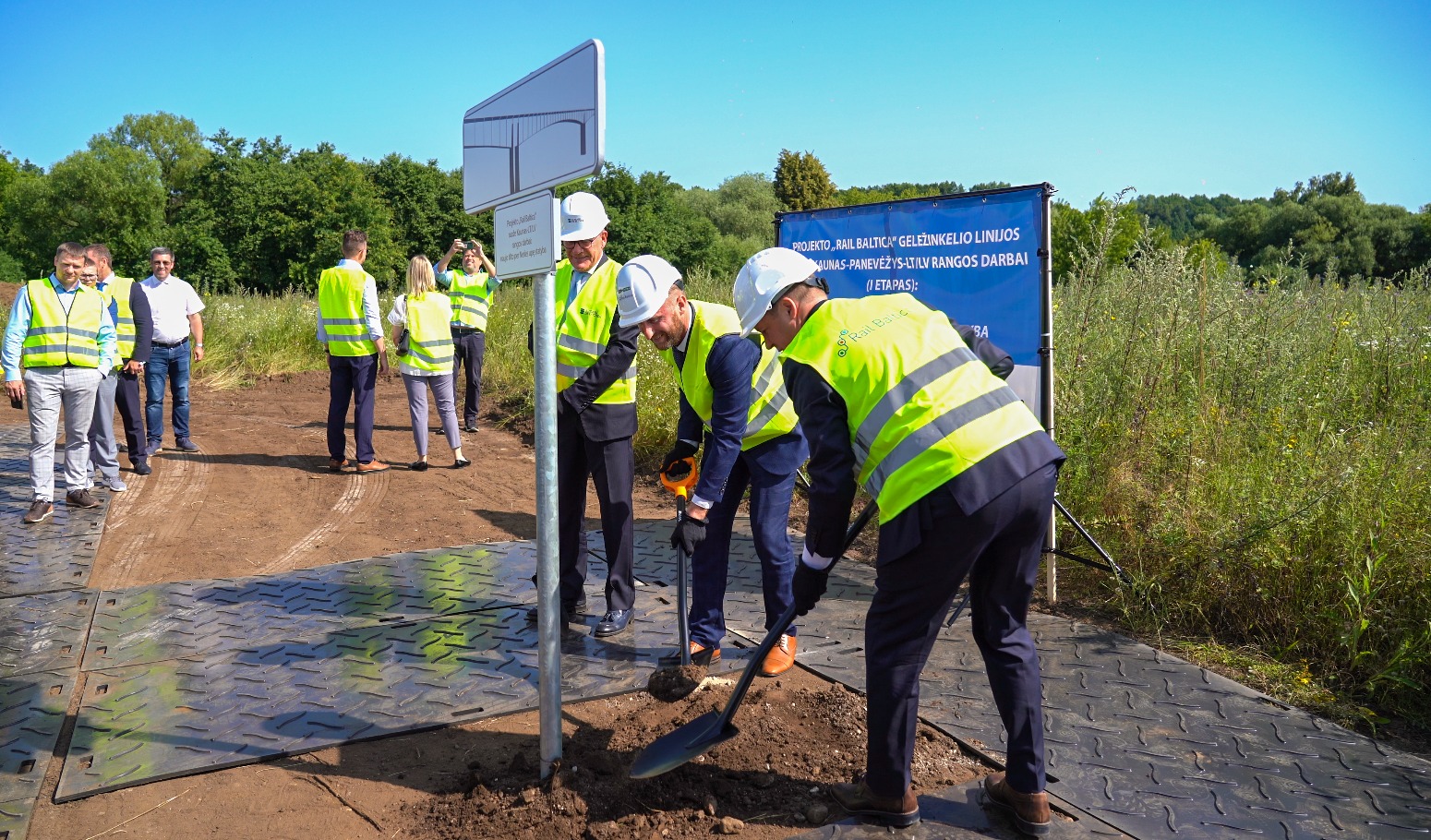 The ceremony for the construction of the Rail Baltica railway bridge over the Neris River has been held in Jonava district, Lithuania.

The symbolic construction opening event was attended by high level of representatives, including the Prime Minister of Lithuania Ingrida Šimonytė, Marius Vaščega, Head of the European Commission Representation in Lithuania, Minister of Transport Marius Skuodis, CEO of LTG Infra Karolis Sankovski, CEO of RB Rail AS Agnis Driksna as well as representatives from other institutions and organisations implementing the Rail Baltica project, partners and guests.

The rail bridge over the Neris River is amongst the largest technical and engineering challenges in Rail Baltica. The length will be up to 1.51 km with an altitude of about 40 meters above the Neris river and its valley. A double-track railway line of European track gauge standard will be built over the bridge, which is almost 14 meters wide.

“To build an entirely new Rail Baltica section between Kaunas and the Lithuanian – Latvian border is quite a challenge, as this is also the first completely new railway section to be built in independent Lithuania. The railway bridge over the Neris river is complex and strategically important infrastructure for the construction of the railway between Kaunas and Riga,” CEO of LTG Infra said.

The bridge is constructed by the Italian company Rizzani de Eccher which will be responsible for works of all the infrastructure of the bridge as well as the nearby infrastructure. EUR 64 million is the contract value. The drainage system, electricity, telecommunications, water supply networks will be reconstructed, the nearby district road will be repaired by building an intersection leg, as well as the landscape will be managed. The technical maintenance services for the construction of the Rail Baltica railway bridge over Neris near Jonava will be provided by Viamatika.

As the bridge will cross the Natura 2000 site of the European ecological network, particular attention is paid to environmental protection. To avoid any impact on the biodiversity of Neris, work in the protection zone of the river Neris will not be carried out during fish migration and spawning. When designing the bridge, invasive solutions in the riverbed were abandoned – bridge supports will not be built in water, so a distance of as much as 150 meters will be maintained above the river between the supports, therefore, fish will be able to migrate freely, and water vegetation will be able to grow.

The Rail Baltica railway bridge over the Neris River if of great importance as it will ensure the construction of the railway line to Latvia, through the Kaunas – Latvian border and it is expected to be completed within 2.5 years.

“Our priority task – to build the main Rail Baltica line from Kaunas to Panevėžys by the end of 2024 and to the Latvian border by 2026 – is moving to the stage of active construction works.  In today’s geopolitical context, the integration of the railway network of Lithuania and all the Baltic States with the Western transport network is a strategic priority of the utmost importance, which must be implemented as soon as possible,” the Minister of Transport said at the ceremony.

The Rail Baltica project is financed by the participating countries – Estonia, Latvia and Lithuania – and up to 85% of total eligible costs are covered by the Connecting Europe Facility (CEF).