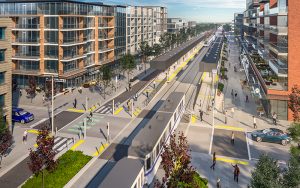 The construction works on the extension of Edmonton metro Line Northwest from, Northern Alberta Institute of Technology (NAIT), to Blatchford have been launched as part of the first phase of the project.

1.5 km of LRT will be built within this phase, starting from the new station at NAIT, crossing north through Blatchford. Under the second phase, 9.4 km of new LRT will be constructed from Blatchford, to Campbell Road, connecting key activity centres along 113A Street and then west along 153 Avenue to Campbell Road.

In 2021-2022, Edmonton city will start laying tracks and building the two LRT stations. The Metro Line to Blatchford line is set to open in 2024-25.

“The LRT network expansion is a critical part of how we’ll grow sustainably as a city, both in terms of giving Edmontonians more transport options and in terms of encouraging development that will help us get to a city of two million people,” said Bruce Ferguson, Branch Manager, LRT Expansion and Renewal.

Blatchford will have two LRT stations. NAIT/Blatchford Market Station will be between Blatchford Town Centre and the NAIT campus redevelopment. Blatchford Gate Station will be in northeast Blatchford. The stations will feature a pedestrian promenade with public plazas, landscaping, tree-lined boulevards and a separated cycle track along the LRT line. Blatchford is a new green community located on the 536-acre former City Centre Airport site, where residents are able to live a sustainable, vibrant and fulfilling urban life.

In the Montrose neighbourhood, work will start on the new Llew Lawrence LRV depot.

The line will significantly reduce road transport as well as the number of cars crossing and is expecting to reduce greenhouse gas emissions by 1,300 tonnes a year.

The Edmonton metro Line Northwest represents the first extension of the currently operating 3.3 km Metro Line. The metro project is one of the identified LRT lines in the Master Plan, a 21.3 km LRT line extending from Churchill LRT Station in downtown Edmonton northwest to the City of St. Albert.