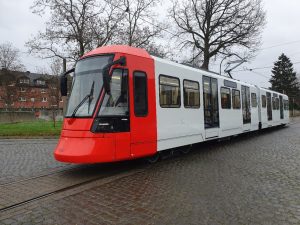 The additional LRVs are intended to complement the 20 vehicles ordered with together with the Düsseldorf Rheinbahn in 2015. These additional vehicles are necessary in order to be able to maintain a high level of operational quality in the long term in view of the growing challenges for public transport.

The new one-directional light rail vehicles are air-conditioned and are equipped with an optimised er’s cab and feature additional seating areas at the end of the vehicle.

The Flexity trams for Cologne habe wide gangways which enable passengers to quickly move through the vehicle, and they can look forward to more comfort thanks to ergonomically shaped seats. They also have multi-purpose areas offering two wheelchair spaces and space for prams. Large TFT screens will provide information about connections and entertainment inside. The new Flecity light rail vehicles can run flexibly with up to three vehicles, even in mixed operation with existing vehicles.

In 2015, the operator has ordered 20 of Flexity high-floor light rail vehicles. Two of these vehicles have now arrived in Cologne and will soon start extensive testing over the coming months and be used for training purposes. With this new order, KVB’s Flexity tram fleet will grow to 293 LRVs. 267 Flexity vehicles of the predecessor series are already in successful use at the Kölner Verkehrs-Betriebe.

KVB intends to modernise its tram fleet including through technical retrofitting as part of an extensive digitalisation project, operational control and customer information or the age-related replacement of vehicle components. The company announced that in the next period, more and more vehicles will be in the workshop. After the project’s completion, the modernised vehicles will strengthen the fleet so that the KVB can provide the expansion of the public transport services planned in the next few years.