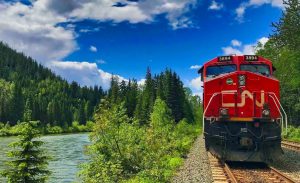 The Canadian National Railway Company (CN) has announced its 2022 investment plans in two provinces to increase transport capacity and safety and to promote a sustainable growth.

This year, CN will invest CAD 790 million (USD 611 million) in Quebec and British Columbia targeting projects to deploy new technology, to deliver increased capacity and new rolling stock and to perform network improvements. The company will also implement programmes as part of its decarbonisation initiatives. These investments will power sustainable growth and ensure the continued safe movement of goods in the two provinces and everywhere on CN’s transcontinental network.

“We continue to make significant investments in our network, technology, and capacity. We are building the premier rail of the 21st century to do even more for our customers, rail companies, shareholders, and the communities in which we operate,” Sean Finn, the Executive Vice-President of CN said.

In Quebec, CN will invest CAD 335 million (USD 259 million) for a maintenance programme which will include the replacement of 43.5 km of rail, the installation of more than 118,000 new rail ties and the reconstruction of 38 road crossing surfaces. In Quebec, CN operates on a 3,289 km rail network for which more than CAD 2.2 billion (USD 1.7 billion) has been spent in the last five years.

Investment plans for investment British Columbia worth CAD 390 million (USD 301.6 million) and include the replacement of 178 km of rail tracks, the installation of 126,000 new rail ties and the reconstruction of 37 road crossing surfaces. In British Columbia, CN operates a rail network of 4,528 km and invested CAD 1.8 billion (USD 1.4 billion) in the last five years.

In both provinces, the company will also deliver maintenance works on bridges, culverts, signal systems, and other track infrastructure.

“At a time when the resilience of our supply chains is more important than ever, investing in our rail transport system ensures essential goods can reach Canadians on time. Railways play an important role in growing our economy, and I am pleased to see CN taking this important step to strengthen our rail networks,” Omar Alghabra, the Canadian Minister of Transport said.