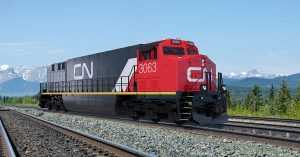 For the new locomotive, CN has received financing support from Pennsylvania’s Department of Environmental Protection for the initiative under the Marine and Rail Freight Movers Grant Programme.

For its first battery-electric locomotive, CN plans to partner with Wabtec to put in service its next-generation FLXdrive technology, which can reduce fuel consumption and emissions by up to 30 per cent. The anticipated efficiencies and emission reductions from the technology will be significant and help open the door to new alternatives beyond the diesel-powered locomotives used today.

“As part of our sustainability strategy to reduce freight transport emissions through innovation, we plan to continue to lead the sector by deploying low and no carbon technologies. At CN, we believe rail has a tremendous potential to reduce the environmental impact of transport. As a mover of the economy, CN is committed to playing a key role in the transition to low-carbon economy,” Jean-Jacques Ruest, the President and Chief Executive Officer, CN said.

The battery-electric freight locomotive will support CN to meet its sustainability goals as the new technology is a key component in achieving an effective transition to a lower carbon transport.

In April 2021, the Science-Based Target Initiative approved CN’s commitment to reduce scope 1 and 2 greenhouse gases emissions by 43% per million gross tonne miles by 2030 from a 2019 base year. CN furthermore commits to reduce scope 3 GHG emissions from fuel and energy related activities by 40% per million gross ton miles by 2030 from a 2019 base year. CN’s Climate Action Plan and its new level of ambition target support the Paris Agreement.

CN is the most fuel-efficient railway in North America, using approximately 15 per cent less locomotive fuel per gross ton mile than the industry average. In 2020, CN’s actions to reduce emissions, mitigate climate risks and to develop the low-carbon economy resulted in CN being one of only three Canadian companies listed on CDP’s prestigious Climate A List. The continuing successful development and availability of innovative propulsion technology is part of a portfolio of carbon reduction initiatives.