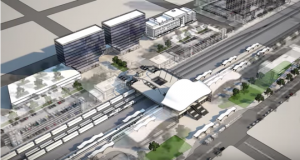 The California High-Speed Rail Authority (CHSRA) entered into an agreement with the City of Palmdale to complete the Palmdale high-speed rail station. Under the agreement, the city will supply matching funds for a grant application to the U.S. Department of Transportation’s Rebuilding American Infrastructure with Sustainability and Equity (RAISE) programme. If awarded, the grant will support completion of the city’s Station Implementation Master Plan (Master Plan).

“We are committed to bringing clean, electrified high-speed rail to Southern California. We are actively working with our local partners on projects such as this, aimed at bringing short and long-term benefits to millions of Californians,” Southern California Regional Director LaDonna DiCamillo said.

The authority is requesting a USD 1.35 million RAISE grant to fund development of the Master Plan for the integrated and multimodal future Palmdale train station. The RAISE funding would enable the authority, in close collaboration with the City of Palmdale, to advance conceptual design of a world-class rail and transit center in downtown Palmdale.

“This is a huge step forward in improving transportation connectivity between the Antelope Valley and the Central Valley which will boost economic vitality both locally and statewide,” Palmdale Mayor Steve Hofbauer said.

The U.S. Department of Transportation announced in April the availability of RAISE funding worth USD 1 billion for the modernisation and construction of transport infrastructure. The  applications are evaluated on criteria that include safety, environmental sustainability, quality of life, economic competitiveness, state of good repair, innovation and partnership.

The Phase 1 of the California high-speed rail system will connect San Francisco to Los Angeles/Anaheim. The project is currently under active construction in the Central Valley along 119 miles (191.5 km) at 35 different construction sites.